A judge declared a mistrial in the case of Officer William Porter in the death of Freddie Gray, an unarmed black man whose death sparked days of violence in Baltimore earlier this spring.

The jury, which was deadlocked on Tuesday after 10 hours of deliberations, informed Judge Barry G. Williams Wednesday afternoon that it could not come to an agreement. Attorneys will appear in court in front of an administrative judge Thursday to pick a retrial date, the Baltimore Sun reports. Porter is not expected to attend.

Mayor Stephanie Rawlings-Blake said State’s Attorney Marilyn Mosby would now “determine whether to further pursue criminal charges” against Porter and five other officers charged in Gray’s death. She urged the city to “remember that collectively, our reaction needs to be one of respect for our neighborhoods and for the residents and businesses of our city.”

Gray, 25, died in police custody on April 19, 2015, after being arrested a week earlier outside of the Gilmor Homes public housing complex in West Baltimore. Video taken by a bystander showed Gray screaming as he was placed inside a police van. The recording, which came after other police-related incidents involving black men and boys, galvanized black communities in Baltimore who had felt routinely marginalized by police.

The city has been preparing for potential violence following the verdict. This week police were deployed in riot gear, and the Baltimore Sun reported that space was cleared in jails for potential mass arrests if violence broke out.

In May, following days of riots that led to the deployment of National Guards troops throughout the city, Baltimore City State’s Attorney Marilyn Mosby criminally charged the six officers involved in Gray’s arrest. Porter, the first officer to go on trial, was charged with involuntary manslaughter, second-degree assault, reckless endangerment and misconduct in office. He pleaded not guilty.

At the trial, prosecutors built their case around Porter’s failure to secure Gray in the back of the police van with a seatbelt, which was against department policy, and his decision not to call for a medic after Gray said he needed medical attention. At one point prosecutors showed a bloody seatbelt as evidence. One medical expert testifying for the defense described Gray’s injuries as “catastrophic.” While testimony indicated that Gray’s injuries occurred inside the van, it was unclear when they took place.

The charges brought by Mosby against the six officers appear to follow the theory police intentionally gave Gray a “rough ride” inside the van.

Porter testified that he did not know Gray was injured until the fourth of sixth stops. Porter said that’s when he told Officer Caesar Goodson, Jr., the van’s driver, that Gray asked to be taken to a hospital.

Read next: The Many Trials of Baltimore’s Rising Prosecutor 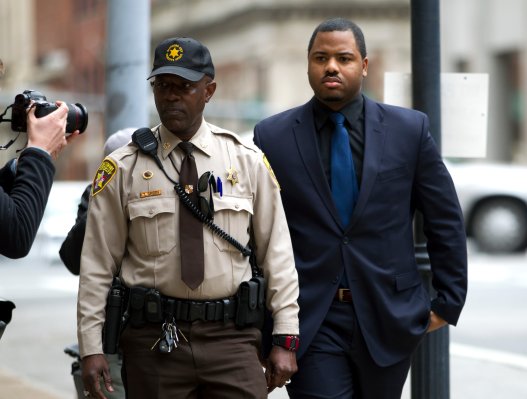 Freddie Gray Mistrial Could Spell Trouble for Future Cases
Next Up: Editor's Pick