How Republicans Finally Got Under Donald Trump's Skin

No one seriously hoped they’d snuff out the support Donald Trump enjoys in the Republican Party. Instead, on the debate stage on the Las Vegas Strip, his rivals were looking to emerge as the most credible alternative to the bombastic billionaire.

As the GOP campaign has grown more focused on foreign policy in the wake of terrorist attacks in Paris and San Bernardino, Calif., the debate Tuesday night on the Las Vegas Strip put competing Republican strategies to defend the nation — and win next year’s general election — on stark display.

Senator Ted Cruz of Texas and Senator Marco Rubio of Florida were vying for one of the slots as the chief anti-Trump, while former Florida governor Jeb Bush showed new life, New Jersey Governor Chris Christie appealed to those frustrated by the drama and political outsiders made a final pitch during the final GOP debate of 2015 with millions watching.

With the Republican campaign slowing as the holiday season approaches, the candidates seized their last opportunity to define themselves before the new year.

Unlike the four previous debates, the Republicans seemed eager to swing widely at one another.

It took a painful half a year, but Trump’s rivals seem to have finally cracked the code for getting under the billionaire’s skin, finding their target in the grand theater constructed to house a production of The Phantom of the Opera.

Bush learned that interrupting his foe put him off his game. Senator Rand Paul of Kentucky figured out that, by suggesting Trump discarded the Constitution, he could flummox the GOP front-runner. And South Carolina Senator Lindsey Graham, who is polling so poorly that he didn’t even qualify for the same debate stage, so irked the real estate giant with his comments that Trump went after him too.

To be sure, Trump still leads in public polling and remains a formidable foe, especially when his ego is at risk. But the evening suggested that Trump is starting to feel the pressures of being the front-runner. He struggled to explain his proposal to shut down parts of the Internet to combat the Islamic State of Iraq and Greater Syria (ISIS) and appeared to be unfamiliar with the nation’s nuclear deterrence capabilities — the sea, air and missile “triad.”

At a rally on the debate’s eve, Trump predicted the debate wouldn’t be “a night in paradise” for him, and judging from his facial expressions and his body language, it sure wasn’t.

Nearly everyone got a chance to weigh in. Trump spoke for roughly 13 minutes, according to NPR’s tally of talking times. Cruz logged about 16 minutes, while Rubio essentially tied Trump.

Read More: Here’s Which Candidate Talked the Most

But the surprise standout was Bush, who delivered his strongest performance of the year on the back of a staunch anti-Trump message.

“Donald is great at the one-liners, but he’s a chaos candidate and he’d be a chaos President,” Bush said. “Donald, you’re not going to be able to insult your way to the presidency. That’s not going to happen.”

Trump, however, didn’t take it in stride. Reminded that running the country is harder than appearing in a debate, Trump offered a witty rejoinder: “I wish it were always as easy as you, Jeb.” He then turned to his favorite barometer for political success: polls. “I’m at 42 and you’re at 3,” Trump sneered.

After the debate, Bush reflected on his performance on CNN, saying, “Sometimes you have to take a stand.”

Bush advisers were clearly proud of their candidate and showed genuine optimism when they met with reporters after the debate. “I found it interesting that the other candidates didn’t seek to distinguish themselves from Donald Trump,” Bush campaign manager Danny Diaz said.

Republican party strategists have long believed that Trump can’t be the nominee — and the debate displayed his rivals believing it was unlikely as well. Bush’s assault on Trump was less a function of taking on the front-runner than it was proving he has the mettle to improve as a candidate. It also allowed him to avoid engaging Rubio and Cruz in their fight.

Cruz was looking to endear himself to cultural conservatives in Iowa with references to Saul Alinsky and conservative radio host Mark Levin, while Rubio showed off his foreign policy chops and bathed himself in technicalities of U.S. nuclear policy in a play for the GOP mainstream.

“If your eyes are glazed over like mine this is what it is like to be on the floor of the United States Senate,” Christie said of the Rubio-Cruz-Paul exchanges, aiming his message at yet another target: primary voters in New Hampshire. “I mean endless debates about how many angels on the head of a pin from people who have never had to make a consequential decision in an executive position.”

Read More: Donald Trump Makes Up With the Republican Party

Meanwhile, Ohio Governor John Kasich and former tech executive Carly Fiorina were seeking the role of schoolmarm pleading for civility and substance. Paul was carrying the banner of civil libertarian and retired neurosurgeon Ben Carson was desperately trying to stem a polling slide with a pitch as a true outsider, even as he dodged substantive questions on policy.

For his part, Trump was swinging at anyone who swung at him, even if they weren’t on the same stage. He signaled he watched an earlier, minidebate for lesser polling candidates, including Graham, the hawkish South Carolinian who is badly struggling in polls.

“I watched Lindsey Graham … He won’t be able to solve the problem,” Trump said. He also made references to undercard partners Rick Santorum and Mike Huckabee, the winners of the last two caucuses in Iowa.

Polling that state shows a win slipping from Trump’s grasp, as Cruz rises and Rubio is racing to get into the mix. Trump’s challenge now is to regain his mojo and steady his campaign. His rivals’ top aides were more than eager to trash talk the man they must best if their bosses stand a chance.

“Trump was less the center of his debate than in prior debates,” said Mike DuHaime, a strategist for Christie. Added Rick Tyler, a Cruz adviser: “It seems like he got less time.” And Alex Conant, a longtime Rubio aide, joked that he wasn’t about to try to figure out what was happening with Trump. “I try not to get into Donald J. Trump’s head.”

Trump’s head, in all likelihood, was likely an unhappy place to be. 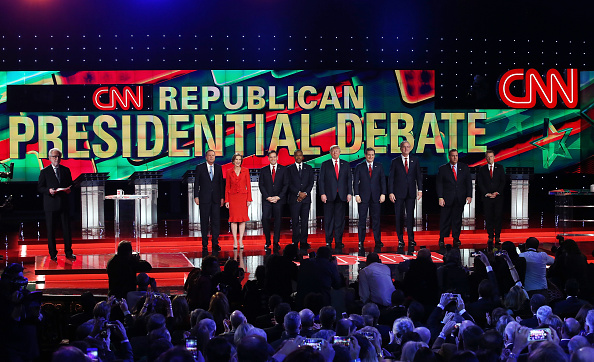 Watch the Republican Debate in 4 Minutes
Next Up: Editor's Pick