Florida Sen. Marco Rubio and Texas Sen. Ted Cruz were at odds over whether or not to grant immigrants a path to citizenship at Tuesday’s Republican debate.

Rubio, when asked about his support for a path to citizenship for undocumented immigrants in 2013, said he now believes that kind of reform should only come after the federal government proves it’s capable of stemming the tide of illegal immigration.

“You can’t even begin that process until you prove to people, not just pass a law that says you’re going to bring illegal immigration under control,” Rubio said. “You’re going to have to do it and prove to people that it’s working and that was the lesson of 2013. It’s more true today than it was then.”

Moderators turned to Cruz to respond to Rubio’s prior comments that their immigration positions aren’t all that different. Cruz denied this and criticized Rubio’s support for a plan he said does not mandate background checks on immigrants.

“The frontline with ISIS isn’t just in Iraq and Syria, it’s also in Kennedy airport and the Rio Grande.” Cruz said. “Now we’ve seen what happened in San Bernardino. When you’re letting people in, when the FBI can’t vet them, it puts American citizens at risk.”

While Cruz and Rubio—both sons of Cuban immigrants—agreed that securing the border was a national priority, a back-an- forth ensued over who advocated for amnesty and who didn’t.

Rubio, visibly frustrated and wanting to pin Cruz down on a position, finally asked, “does Ted Cruz rule out ever legalizing people that are in this country now?”

“I have never supported legalization and I do not intend to support legalization,” Cruz replied. “What you do is you enforce the law.” 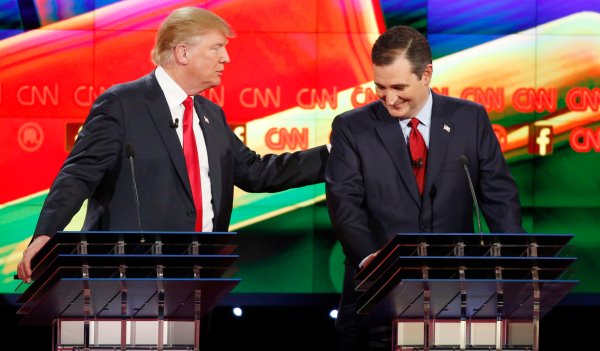 Donald Trump Plays Nice With Ted Cruz at Debate
Next Up: Editor's Pick