A Muslim American Mother's Hope for Her Daughter

Ideas
By Waheeda Samady
Waheeda Samady is a physician and assistant professor at Northwestern University in the Department of Pediatrics.

It was only a two months ago that I celebrated my daughter’s first birthday. Despite being a pediatrician and a former nanny, there were a few things about motherhood that took me by surprise. I thought I was prepared for the sleeplessness, but I was not. I also didn’t fully comprehend how life would now contain a sense of chaos at all times. But what I really did not anticipate was the worry. I have never worried so much in my entire life. I worried about the way she breathed, the way she ate, the way she slept. Like most parents, I wanted to make sure I was doing all the right things to support her health, intelligence and confidence. I hoped that as I saw her grow and develop, I would learn to worry less.

As I look around at the world we live in today, I worry more.

I worry about gun violence, drugs, alcohol, gangs and all the pressures that wreak such havoc on young people. I worry about ISIS, al-Qaeda, and the Taliban, whose disgusting theories and violent acts have killed so many people around the world. I worry about the KKK and Neo-Nazis, whose message is now being passed on through generations. I worry about violent extremism, regardless of the faith or faction to which it claims to belong. I am saddened to repeatedly watch men bend the words of God for their own agenda.

I worry about the anti-Muslim racist backlash, hate’s amazing ability to breed even more hate. I worry because after so many mass shootings in America, the conversation now mostly revolves around immigration, not gun control. I worry that the definition of a terrorist for many now includes “Muslim” and that as a Muslim you are considered a terrorist until you have proven otherwise.

I worry that my daughter will be bullied in school by misinformed classmates and teachers. I worry that this could alienate her, marginalize her, and eventually break her. I worry that the day will come when I will be forced to place her in a safer but more secluded private institution, sacrificing the diverse experiences her father and I enjoyed in public schools. I am constantly thinking about how I can protect her from all of this, because my greatest fear is that amidst all the hate that led to violence, that led to more violence and more hate, she will either become disenfranchised and indifferent or she will succumb to the rhetoric and subscribe to her own version of it.

I also worry about how these new flames are just an addition to fires that have been burning humans for centuries. Why are political controversies still dividing the sons of Abraham? Why has the abuse of human beings as cheap labor become common place? And for how long will we bear witness to the lethal disregard for black lives? I worry when I see that war has seemed to become a corporate goal instead of a necessary evil. I worry that greed has made us blind to the destruction of our ecosystem and that war drums have made us deaf to the voice of our own conscious. I worry about the countless dictators who have taken the reigns of countries and driven them into bloodshed. I worry about human lives being regarded as “collateral damage.” And I worry about polarized bipartisan nations and the hateful things people will spew out to gain support in an election. I worry even more when it seems to be working.

While we have made some progress, there is still much to fight. This is our fight. I hope to teach my daughter that despite all the distractions, our sole purpose on this planet is to struggle for the goodness of humanity, and goodness can only flourish when we uphold justice for every living thing. There is much hate in this world, but there is far more hope.

I was born in a war-torn Afghanistan and 18 years later was admitted to one of the top universities in the world. Faith, family and some amazing teachers taught me hope’s timeless truth: it is not your circumstances that define you; it is your convictions followed by your actions. Today, in Afghanistan, in America, and around the world, men and women are organizing, building bridges, educating and empowering their communities to win the battle against racism, sexism and corruption. Physicians and scientists are wiping out diseases that used to cripple and kill. Young girls are finding their voice and courageously standing up to the political machines that bullied their mothers. School children open their books every day, eager for the knowledge that will change their situation. And somewhere deep in the rainforest, activists are stopping the destructions of wildlife that was once helpless against extinction. The world is not perfect, but it is the imperfections that teach us to hope and elevate the status of the human race.

Today, I resolve to trade in my exhaustive worrying for hope. Because it’s really there, in lines of the holy books, in the hearts of people seeking truth, in the generous acts of kindness that I have witnessed time and time again. Smile after smile, post after post, tweet after tweet, hope is alive and when good people get together there is no limit to their potential. And there are a lot of good people in America, from every walk of life and every belief system.

I hope my daughter will know this country as I know it and that she will want to be part of this great human experiment. My promise to her is that I will stay engaged. As a citizen, neighbor, physician and worshiper, I will be present for her and soon enough, with her. I hope that we can remind each other to keep our hearts close to the truth, our minds free and our doors open. And as long as there is mutual respect, let us engage in dialogue as it is the first critical step toward healing.

I had hoped that by the time my daughter understood the word “prejudice,” it would only be used in the past tense. It is not so. We can’t seem to learn this lesson. Islamophobia is gaining momentum and the Muslim-American path is steeply uphill—but we will climb it together. 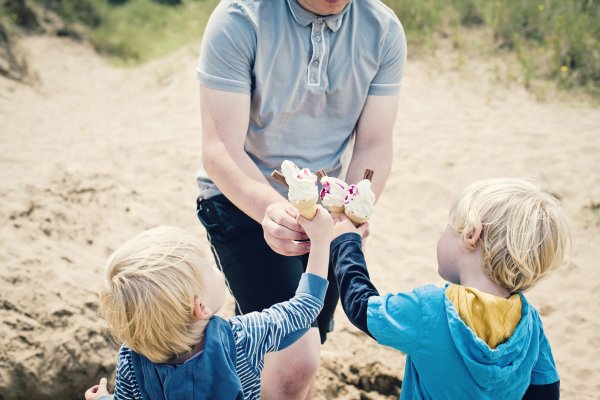 Millennials Are More Confident Parents
Next Up: Editor's Pick