Never seen a Star Wars movie but your friends already bought you a ticket to The Force Awakens? Don’t worry. We have you covered with your basic terms. Major spoilers ahead.

Star Wars is made up of three trilogies that were (illogically) made out of order. First came episodes IV, V and VI. That’s Star Wars: A New Hope in 1977, The Empire Strikes Back in 1980 and Return of the Jedi in 1983. In that trilogy the good guys (the Rebellion and the Jedi) fight the bad guys (the Empire ruled by the Sith). When people refer to the “original trilogy” they are referring to these movies. Most of this glossary will deal with these films since they are widely considered far superior to the prequels.

But just so you’re aware: The prequels were Star Wars Episode I: The Phantom Menace (1999), Star Wars Episode II: Attack of the Clones (2002) and Star Wars Episode III: Revenge of the Sith (2005). This chronicles the story of how Anakin Skywalker became Darth Vader, the main bad guy in the earlier (but actually later) trilogy. Both the first and second trilogies were directed by George Lucas.

The new movie, Star Wars: The Force Awakens is the first installment in the new trilogy. It was directed by J.J. Abrams and includes the stars of the original cast, Harrison Ford (Han Solo), Carrie Fisher (Princess Leia) and Mark Hamill (Luke Skywalker). It will be followed by two more Star Wars films, now being called just episodes VIII and IX.

And as if that weren’t enough, Disney and Lucasfilm are also planning a number of Star Wars spinoff films, one of which will be called Rogue One and another of which focuses on a younger version of Han Solo, the Harrison Ford character.

Here’s how the movie explains it: “The Force is what gives a Jedi his power. It’s an energy field created by all living things. It surrounds us and penetrates us. It binds the galaxy together.” Basically, certain people can use their mind to move objects, to control what people do and think, and more, all using microscopic organisms called midi-chlorians. Not everyone can use the Force, but those who can can use it for good or evil. The Jedi use the light side, the Sith the dark side.

Long ago, there used to be many Jedi Knights who kept the peace and fought the Sith. Eventually, however, the Sith took over and killed all but a few Jedi. In episodes IV, V and VI, the Jedi join forces with the Rebellion to defeat the Empire. Someone in training to become a Jedi, known as a Padawan or a Jedi apprentice, trains one-on-one with a Jedi Master.

A blade made of pure energy wielded by those who can use the force. Generally speaking, Sith use red blades.

Luke Skywalker learns the ways of the Force first from Obi-Wan Kenobi then from Yoda and becomes a Jedi Knight. Along the way, he develops a crush on a princess named Leia, but it turns out she’s his sister. He also loses his hand to Darth Vader, though ultimately he saves the galaxy.

Darth Vader is the ultimate bad guy. As a child, he was Anakin Skywalker but when he went to the dark side (i.e. became a bad guy) he earned the title “Darth,” which basically just means dark lord. He also (spoiler alert) turns out to be Luke and Leia’s father. (In fact, the reason he went from being a Jedi in training to a Sith is because Chancellor Palpatine—who becomes the emperor—promised that he would be able to save the life of his wife, Padme, who was going to die. That didn’t pan out.)

Leia begins the series being captured by Darth Vader. She’s rescued by Luke and Han, though she quickly makes it clear that she’s the one really in charge—not the boys.

A reckless but charming smuggler and space cowboy, Han Solo and his sidekick Chewbacca help Luke and Leia save the galaxy. He and Leia also fall in love.

A space station that Darth Vader uses to blow up planet. The Rebellion destroys it at the beginning of Episode IV, but the empire builds another one for Episode VI (which the rebels also destroy).

These are soldiers in white body armor who work for the Empire.

A robot with artificial intelligence.

A tall, gold robot who is always worrying.

A cute white and blue robot who makes beeping noises and often accompanies Luke on his flights.

Soldiers of the Republic, the governing body in episodes I, II and III. 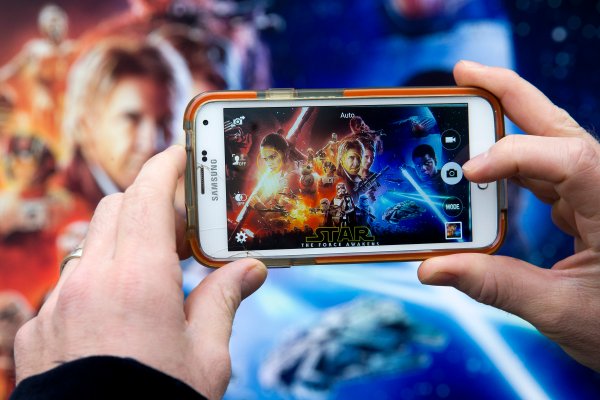 The First Reviews For Star Wars: The Force Awakens Are Here
Next Up: Editor's Pick