Exclusive: Chelsea Clinton to Ramp Up Campaign Events for Her Mother

Vice Chair of the Clinton Foundation, Chelsea Clinton, inspires 18,000 students and educators at WE Day Minnesota at the Xcel Energy Center on November 3, 2015.
Adam Bettcher—2014 Adam Bettcher
By Sam Frizell

Chelsea Clinton will be the solo headliner of two campaign fundraisers in Boston in early January, according to a copy of an invitation obtained by TIME, marking the first time she will campaign on her own for her mother in the 2016 presidential campaign.

The fundraisers, both scheduled for Jan. 11, are the beginning of a new level of involvement by the former First Daughter: shortly afterward, she will also begin a round of campaign events in Iowa, New Hampshire and other early primary states, a source close to Chelsea told TIME.

“As we look to next year, Chelsea is excited to ramp up her public campaign activity and get to Iowa and New Hampshire to meet voters and talk about why her mom should be the next President,” the source said. “She will hit the road in January, doing public events as well as fundraisers (such as two in Boston) so keep an eye out for her in New Hampshire, Iowa and other early states shortly after.”

Chelsea Clinton has become an increasingly public figure since her mother’s 2008 campaign, taking over many Clinton Foundation responsibilities and touring the United States extensively to promote her book, It’s Your World: Get Informed, Get Inspired & Get Going!, marketed for children ages 10 and up. She is vice chair of the board at the Clinton Foundation, and the foundation’s name was changed in 2013 to include her name.

But until now, she has remained mostly on the sidelines of her mother’s presidential campaign, focusing on operating the Clinton Foundation events. Her daughter, Charlotte, is now nearly fifteen months old.

Aides to the Clinton campaign have hinted for months that Chelsea would likely play a larger role as the campaign went underway. Now, Chelsea’s increased involvement in the campaign marks a new phase in race, as the campaign gathers its surrogates and prepares for the final stretch before the Iowa caucus.

Chelsea is popular among students and younger voters, and her philanthropic work and her age (she is 35) could be a boon for the campaign’s efforts to reach young people.

She has taken part in a number of campaign events so far this year, though mostly in a supporting role and never alone.

She appeared in June at the Clinton campaign launch in June on New York City’s Roosevelt Island alongside her mother and former President Bill Clinton, but did not speak herself. In September, Chelsea gave a speech alongside her mother at the Foundry United Methodist Church in Washington, D.C. This coming Thursday, she will headline a fundraiser with her mother, Politico reported earlier this month.

At the fundraisers Chelsea is hosting in Boston, attendees will be asked to contribute $250, $500 or $1,000. Though events hosted by Hillary Clinton personally vary in entry cost, attendees are usually asked to raise larger amounts, and regularly require a contribution of $2,700 to attend.

Read Next: Chelsea Clinton Gets Ready to Take the Stage 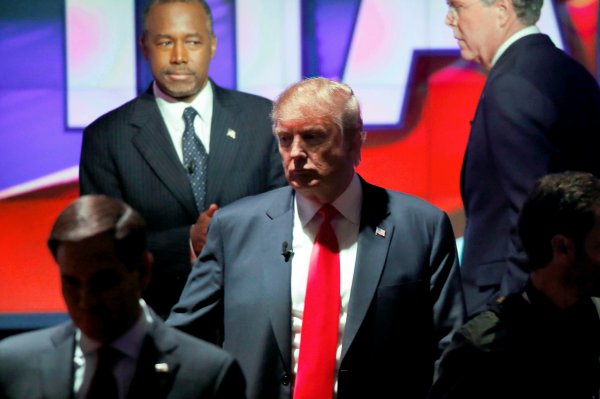 Republicans Turn on Each Other in Bitter Las Vegas Debate
Next Up: Editor's Pick