This L.A. Teacher Fought the Terror Threat by Assigning a Final Exam

A Los Angeles teacher who was blasted as a “savage” for still assigning a final exam even as city schools were closed over a terror threat said she didn’t want to let terrorism win over her students’ education.

Cassandra McGrath, 30, angered at least one student when she insisted her class still complete a writing test Tuesday shortly after Los Angeles closed all of its nearly 1,100 public schools over an “electronic threat.” She asked her senior English class to submit the final essay from home.

“When you have a savage teacher and she still wants you to complete her final even though there’s no school,” one of her students wrote on Twitter. The student deleted the post, but still re-tweeted more than a half-dozen responses from friends and classmates also slamming the teacher as “crazy.”

“We probably dying and s— and she will be like your hands still work there is no excuse,” another wrote, while a third said she was “hating” the teacher.

McGrath, an eight-year education veteran who teaches at Theodore Roosevelt High School, said her decision was inspired by Malala Yousafzai, the Pakistani teenage activitist who continued her fight for girls’ education even after she was shot in the head by Taliban militants in 2012.

“I guess they don’t see it the same way,” the Los Angeles teacher added.

The assignment was to write an essay about whether juveniles should be incarcerated and tried the same way as adults, McGrath said. Students were supposed to write it in class Tuesday during a nearly two-hour-long period. There is no word count, and the essay is worth 10% of their grade.

“They already had all their stuff to do their final,” McGrath said. “I just said, ‘Do it while you can, and you can come redo it in class.”

“You might as well do it at home if you’re already sitting at home,” she added. “I don’t like the idea that some terrorist is stopping them from their education. I just wanted them to be productive.”

McGrath was stunned when TIME read the angry student’s tweet to her.

“A savage teacher?” she said. “Come on. They just had to write a draft. That’s silly. I was excited for them to take their final.”

The educator, who moonlights as a singer and songwriter, said she also wanted to make sure her students’ college futures weren’t jeopardized. Teachers have until the end of the day Thursday to submit final grades for their students, she said. 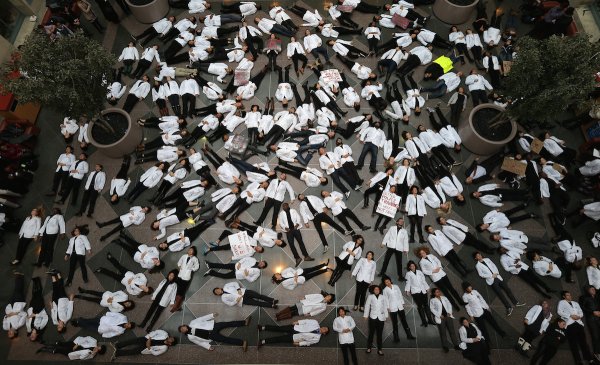 The Next Step for Today’s Student Activists
Next Up: Editor's Pick