Audience members who watched the premiere of Star Wars: The Force Awakens Monday night in Hollywood happily tweeted that the film passed the Bechdel Test, a basic measure of how women are portrayed in a film.

The Bechdel Test, invented by cartoonist and Fun Home author Alison Bechdel in her comic strip Dykes to Watch Out For, measures whether two women speak to one another in a film about something other than a man. Though Bechdel herself has said it’s an imperfect measure of how feminist a film is, a surprising number of movies do not succeed in overcoming this low hurdle. The Bechdel Test “pass rate” was just 55.4% in 2014, according to data publishing site Silk.

But The Force Awakens, which stars Daisy Ridley, Carrie Fisher, Lupita N’yongo and Gwendoline Christie, apparently does include conversations among these women about topics other than the men in their lives (though we won’t spoil what exactly those topics are). Los Angeles Times film writer Rebecca Keegan was delighted to tweet the news Monday night (spoiler-free).

It’s just one more encouraging sign that Star Wars has updated its views on women since its Princess Leia-in-the-gold-bikini days. In a recent interview with TIME, Gwendoline Christie, who plays villain Captain Phasma, said she thought even her costume in The Force Awakens was progressive. “It is rare that women get to play a character and below the neck they are really covered up to the extent that you cannot really see the flesh outlines of their body,” she said. “It felt to me that there was a character where we should respond to her due to her actions and what she represented rather than a more conventional delineated flesh outline. And that felt like a step forward in terms of the kind of characters women play in films in our entertainment industry.”

In its casting alone, The Force Awakens marks major progress for women in big-budget films. The film stars four women in major roles despite initial concerns about an early cast photo that was overwhelmingly dominated by men. That’s far better than most studio films: Women made up just 12% of protagonists and 30% of all speaking characters in the top 100 grossing films in 2014, according to the Center for the Study of Women in Television and Film at San Diego State University.

Read More: Gwendoline Christie on Why Her Star WarsCostume Is a ‘Step Forward’ for Women 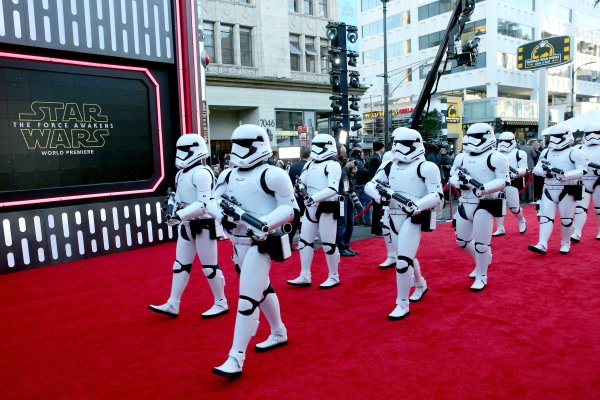