8 Things to Watch for at the Las Vegas Republican Debate

This time what happens in Vegas will be remembered — big league, as Donald Trump would say.

A Republican nomination contest far more wild than any expected will put itself to the test once again Tuesday night, when Republicans gather at the Venetian Casino on the Vegas strip.

The event will be broadcast on CNN, with a free online stream at CNN.com. The coverage starts at 6 p.m. E.T. for the undercard and 8:30 p.m. E.T. for the main event, though don’t worry if you are a little tardy. CNN has a tendency to vamp and go to commercial for between 15 and 30 minutes before the opening statements and questions.

In the meantime, here are eight story lines to watch for as the zingers start flying.

Foreign policy at the forefront
After the attacks in Paris and San Bernardino, Calif., CNN, which is hosting the debate, has made clear that foreign policy will be the central focus of Tuesday’s debate. With fears of terrorism on the rise, candidates will be presented with the challenge of articulating their plans on combating ISIS in a format that doesn’t reward detailed answers. The more serious tone will likely reward candidates who adapt their messages to fit the new dynamic of the race, and may pose a problem for those who struggle on the substance.

Everybody vs. Ted Cruz
Cruz has surged to the top of polls in Iowa, where he has consolidated the support of evangelicals and nationally, where he’s been the main beneficiary of Ben Carson’s polling collapse. Now he will be rewarded with a big target on his back Tuesday night. The attackers will range from Donald Trump, who is looking to regain his lead in the Hawkeye State, to Marco Rubio and Chris Christie who see attacking Cruz’s perceived softness on national-security issues as beneficial to their cause. But don’t expect Cruz to respond to all attacks. He brushed off Trump calling him a “maniac” with a song, and has refrained from engaging in personal attacks with most of his rivals. The exception: Rubio, his Senate rival whom Cruz is looking to brand as soft on illegal immigration.

Trump tries to get back to “winning”
The bombastic national front-runner, Trump is expected to open fire on Cruz and Rubio — his two leading threats with whom he has been sparring for weeks. His latest attack on Cruz — “a little bit of a maniac” — triggered a backlash from conservative radio hosts Mark Levin and Rush Limbaugh — a potentially game-changing development. (Limbaugh called the comment “blunder,” while Levin said Trump “really screwed up.”) Meanwhile, Trump will face fire over his recent comments calling on a ban on Muslims entering the U.S.

Rubio attempts to stay on track
In the six weeks since the last debate, Rubio has fought to avoid peaking too early, and thus far his strategy is succeeding. He remains deeply popular among Republicans, but with the holiday season approaching, he needs to turn those favorable opinions into support. Rubio has spent the last debates seamlessly introducing himself to voters, but expect him to focus less on his personal narrative and more on his vision for the country. He’ll have to fend off attacks from rivals who see his untapped potential as the threat. But look for him to identify and attempt to redirect the frustrations that are driving voters to Trump and Carson with an uplifting message, as he does in his latest television ad.

Carson fights to remain relevant
The past month has not been kind. Carson has watched his polling collapse and has struggled to remain in the conversation, while betraying a lack of experience on foreign policy issues has drawn ridicule. He now faces his stiffest test yet as a candidate. After recently mispronouncing the terrorist group Hamas as the condiment “humus” and erroneously claiming that Chinese forces were fighting in Syria in the last debate, Carson will have to fight the growing belief in GOP circles that he’s unprepared for the job of Commander in Chief. Meanwhile his sedate performance may be ill-suited to the fiery times of terrorism fears.

Christie and Jeb Bush clamor for attention
Back on the main stage after being relegated to the undercard debate in Milwaukee, Christie will look to build on his momentum in New Hampshire by casting himself as the most electable governor. Meanwhile, Bush is fighting to put an end to unfounded rumors that he may be looking to drop out by showing he belongs on that stage. Both are betting that the foreign policy focus plays to their strengths, but they will have to do more than just sound presidential on stage. They will have to score points on their more popular rivals.

The Adelson Primary Play
The debate is being held at the Venetian Casino and Hotel, which is owned by GOP megadonor Sheldon Adelson, who has thus far remained neutral in the race. While Rubio and Cruz are among those on the short list for winning his support, a range of candidates will meet with him while they are in Las Vegas. Even so, Adelson, who spent $15 million propping up Newt Gingrich in 2012, before devoting nearly 10 times that to GOP causes in the general election that year, appears in no rush to make up his mind. But that won’t stop the candidates from doing their best to win him over. His No. 1 issue: American support for a strong Israel.

The undercard is still going
Mike Huckabee, Lindsey Graham, George Pataki and Rick Santorum will share a more sedate stage that will likely involve an in-the-weeds discussion of foreign policy issues. The challenge: they all broadly agree. Expect them to attack Trump, Cruz and Rubio from afar. Don’t expect it to matter all that much. 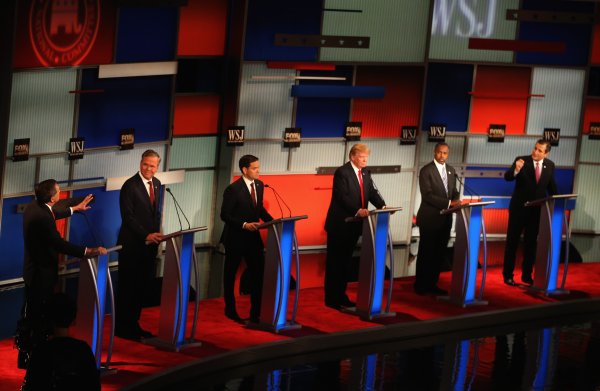 CNN Announces Criteria for Next Republican Debate
Next Up: Editor's Pick