Review: Quentin Tarantino's Hateful Eight Revels in Snow, Not So Much in People

Quentin Tarantino has always been openhearted about his love for spaghetti westerns, particularly those of Sergio Corbucci. Though Corbucci is less well known in the States than his splashier counterpart, Sergio Leone, his best pictures—like the 1966 Django, featuring Franco Nero as a raggedy gunfighter who drags a coffin, like an inconvenient suitcase, wherever he goes—have an earthy fortitude that not even Leone quite matches. The rogues who people Corbucci’s films do terrible things, without remorse, and their faces are roadmaps of scowls and sneers, carrying the scars of that. Tarantino has said of Corbucci, “He loves the uglies,” and Tarantino does too, as anyone who has ever adored one (or more) of his movies can attest.

But is he a man who loves too much? The first third of Tarantino’s eighth movie, The Hateful Eight, is unassailably beautiful. This is a western set in snow country, and those are more rare than you might think: Robert Altman’s McCabe and Mrs. Miller and Corbucci’s The Great Silence are two superb examples, but when most people think “westerns,” it’s the scrubby desert majesty of John Ford that comes to mind. Tarantino and his frequent cinematographer Robert Richardson introduce us to a world—post-Civil War Wyoming, to be exact—in which the Inuit’s quasi-mythical abundance of words for “snow” have been translated into an un-color wheel of satin grays, sable blacks and primal whites, with millions of gradations in between. In the opening sequence, a dappled, ashy form that appears to be a gnarled tree turns out to be a stone crucifix, partly obscured by pillowy snow, a forgotten Jesus in a godforsaken land.

But that early visual is a ruse, a gorgeously cinematic red herring that does nothing to prepare us for the meandering dialogue, blasé brutality and intellectual and spiritual murkiness that lie ahead. All the promise of the first hour of The Hateful Eight is squandered in the last two, once the action heads indoors: What begins as a wickedly chilly adventure—one that seems committed to using every inch of the rare ultra-wide 70mm format that Tarantino so lovingly resurrected for this film—evolves into a frostbitten, claustrophobic chamber piece in which an assortment of eight (or so) miscreants and ne’er-do-wells, snowbound in a remote mercantile establishment, debase one another, verbally and otherwise—until only bits of them, barely fit for crows, are left.

Samuel L. Jackson plays bounty hunter and former Union soldier Major Marquis Warren, long-legged and loping in an inky cape-shouldered military coat and broad-brimmed hat. Any filmmaker might want to make a western just to put Jackson in this kind of getup, and who could blame him? Warren, surly yet principled, is headed for the nearest far-away town, Red Rock—he’s got a few armloads of dead bodies to deliver—and hops a ride on a stagecoach passing through: Its passengers are fellow bounty hunter John Ruth (Kurt Russell), a ruffian in a scrubby fur coat, and the outlaw he’s captured, tough little Wild West urchin Daisy Domergue (Jennifer Jason Leigh). Daisy’s left eye is ringed by a hell of a shiner, and it doesn’t take long to figure out that Ruth is the one who gave it to her. He smacks her often, and with escalating bravado, in what becomes the movie’s defining running joke: The more she gets hit, the more she grins and cackles, as if she were drawing banshee strength from the abuse—a notion that may seem like misogyny but is in fact its triumphant opposite.

At some point belligerent, bigoted Sheriff Chris Mannix (Walton Goggins) also wedges himself into that coach. It’s drawn by a half-dozen handsome, stamping horses trying to outrun an encroaching snow storm, and it will eventually end up at Minnie’s Haberdashery, a popular stopping-off point for weary travelers. Huddled inside are a hangman with oily-impeccable manners, Tim Roth’s Owaldo Mobray, Michael Madsen’s cowboy scribe Joe Gage and Bruce Dern’s General Sandy Smithers, a classic Confederate racist who, naturally, gets right under Major Warren’s skin: The centerpiece of their inflamed encounter is a protracted story involving a key part of Warren’s anatomy and some of the creative uses he’s found for it.

As with Tarantino’s 2012 Django Unchained, the woolly, rambling dialogue here focuses largely on race—or, more specifically, the scourge of racism. The N-word flows freely here, as it did in Django Unchained, though in that film its use was more pointedly historical—plus it was always clear, from a character’s mannerisms and tone of voice, how it was being used. In The Hateful Eight, the word is most often folded into a kind of stylized riffing, potentially offensive if that sort of thing troubles you and nearly invisible—and thus ineffectual—if it doesn’t.

So why use it at all? It’s easy to see that The Hateful Eight is “about” racism, though it’s unclear, exactly, what Tarantino is trying to say, other than he’s against it—and we already knew that. Tarantino has populated his film with intentionally unlikable characters, one of the most thrilling gambles a filmmaker can take: The challenge—one met, for example, by Sam Peckinpah with The Wild Bunch and Brian De Palma with Scarface—is to make us care for them, in all their flawed splendor.

But there’s so little human grandeur, naughty or nice, in The Hateful Eight. That’s all the more frustrating in the context of how much Tarantino gets right: The action, as always in his movies, is crisp and specific. The score, by Ennio Morricone, as close to being a deity as they come, is both majestic and delicate, its grand spaces filled with tendrils of feeling—but it’s as if the music can feel something we can’t. The characters here seem only half-formed. They talk a lot, but it’s as if they’re trying—and failing—to argue their way toward some interior defining truth. (Daisy Domergue, as Leigh plays her, is the exception. We know what she’s thinking every minute, and we love her more even when what she’s thinking is wholly repugnant.)

The Hateful Eight moves slowly—it’s ambitious in its languor. But when the major violence does kick in, it feels pinched and mingy, rather than resplendent, which is uncharacteristic for Tarantino. The brutality here is sometimes viciously funny: Heads are blown open, their pinky-red contents filling the air like mini-geysers. If bloody projectile vomit is your thing, there’s some of that too. But even in Reservoir Dogs, perhaps Tarantino’s most heartlessly violent picture, there’s at least a bedrock of chilly passion lying beneath the brutality, and an honesty, too: after all, our collective love for movie violence is a kind of l’amour fou. In The Hateful Eight, the violence, if occasionally entertaining, is never sorrowful or cathartic or complex in any way, and before long its casual cruelty becomes a kind of blandness. At one point the movie’s most buoyant and likable character, suffering from a gunshot would, begs to be spared—only to be finished off ruthlessly. The moment is so horrifying you could almost laugh, but laughing would hurt too much. People do terrible things in The Hateful Eight—no matter what you make of the movie, the title doesn’t disappoint. But its glorious, snow-capped visuals aside, The Hateful Eight comes off as haggard and atrophied. It’s bloodless even in the midst of all its bloodiness; its characters are devoid of nobility, even the horrible kind. These are uglies not even a mother could love. 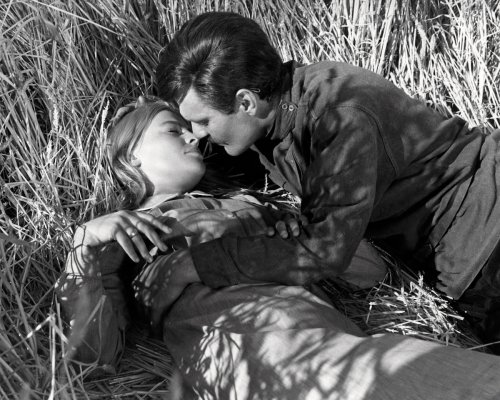 How 'Doctor Zhivago' Went From Page to Screen
Next Up: Editor's Pick