This Is How Letters to Santa Were First Delivered by the U.S. Mail

Every year thousands of children write letters to Santa Claus to request the presents they want to receive from the fabled North Pole resident, and in the United States those letters are often dropped in a real mailbox. But how did that tradition start?

Some of the earliest Christmas correspondence wasn’t actually written to Santa, but rather from him. In the first half of the 19th Century, Santa Claus was more of a disciplinary figure than the jolly old fellow who sorts “naughty” from “nice” these days. Stories of Saint Nicholas were meant to encourage children to behave, and some parents even wrote letters “from” Santa Claus to their children discussing their conduct over the previous year, mischievous or obedient, per Smithsonian.

The American image of Santa Claus developed throughout the 1800s, from the 1823 publication of the poem “A Visit From St. Nicholas”—now known by its first line, “’Twas the night before Christmas”—to cartoonist Thomas Nast’s Christmas illustrations in the widely read Harper’s Weekly. Nast’s drawings of Santa, which first appeared in Harper’s during the Civil War, helped create the visual references for Santa Claus that are still familiar today, including a red suit and white beard. Nast’s drawings also captured the earliest days of the postal service’s involvement in the Christmas workflow.

In 1871 Nast drew Santa Claus at his desk reading his mail and sorting it into two piles. The one labeled “letters from naughty children’s parents” reaches well above his head, whereas “letters from good children’s parents” is a far smaller stack. A few years later, in 1879, Nast created the first known image of someone using the U.S. mail system to write to Santa Claus. In this Harper’s illustration, a youthful figure puts a letter addressed to “St. Claus North Pole” in a mailbox on a snowy evening.

By that point, however, the mail system was already being used for letters to Santa. On Boxing Day 1874, for example, the New York Times included an item about letters “deposited in the Richmond Post Office, evidently written by children, plainly indicated that they, anticipating the annual visit of Santa Claus, wished to remind him of what they most desired.” The Times quoted a few letters: one requested “a big wagon—not so very big—four wheels, two packs pop-crackers, a Mother Hubbard book.”

At first, the U.S. Postal Service would consider letters addressed to Santa Claus undeliverable, either returning them to their senders or sending them to the Dead Letter Office. Around the turn of the 20th century, however, philanthropists and charities expressed interest in fulfilling Santa’s role for poor children who sent him letters. “The Post Office Department does not believe in Santa Claus. Officially the dispenser of Christmas cheer for little folks is a myth,” the Times wrote in 1906. “The Christmas season has no charm for the prosaic employees of the Dead Letter Office. It means only a lot of extra work and bother for them.” The article went on to deplore the unsympathetic post office and “red-tape-bound officialdom” for their lack of imagination to find a way to honor the children’s requests.

The following year, the Postmaster General allowed his employees to distribute the letters, but the charitable people and organizations to whom they were given found themselves faced with the task of deciding whether the children were really in need of their assistance. The resulting complaints meant the Postmaster General did not renew the allowance the following year.

His successor wrote an order in 1911 that all letters “addressed plainly and unmistakably to ‘Santa Claus’” could be delivered to “responsible institutions or individuals” to use for “philanthropic purposes.” This time permission was renewed and in 1913 made permanent. Tonight Show host Johnny Carson read out letters from needy children during December shows in the 1960s, helping to popularize the program. In 1989, Santa got his own ZIP Code.

The program continues today, along with a USPS scheme allowing parents to reply to their children’s letters to Santa Claus. 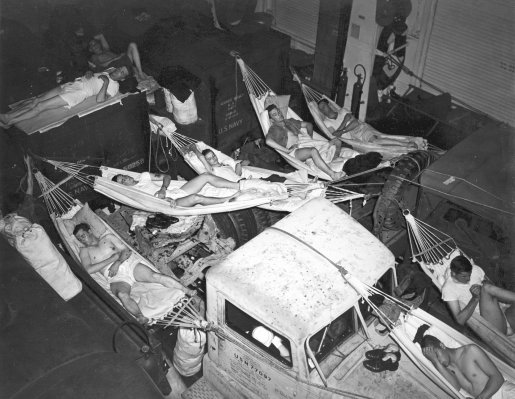 The Race to Get World War II Veterans Home in Time for Christmas
Next Up: Editor's Pick