Typhoon Melor made landfall in the central Philippines on Monday, prompting disaster authorities to evacuate about 750,000 people in three provinces as the country prepared to be deluged with torrential rain and high winds.

To date, 40 domestic flights have been grounded and dozens of ferries and fishing boats told to remain in port on Samar island, leaving approximately 8,000 people stranded. Twenty provinces remain under a public storm alert, with some schools and offices ordered to temporarily close, reports Reuters.

Known locally as Typhoon Nona, the tropical storm was expected to trigger flooding, landslides and storm surges of up to 4 m (13 ft.). Intensity estimates from the University of Wisconsin-Madison said maximum wind speeds have reached 220 km/h (135 m.p.h.), according to the Weather Network.

“While Melor will not slam onshore as a super typhoon as once feared, it still poses dangers to lives and property,” AccuWeather meteorologist Adam Douty told Reuters.

The typhoon was taking a similar path to the Category 5 storm Haiyan that devastated the city of Tacloban in 2013, killing almost 8,000 people. 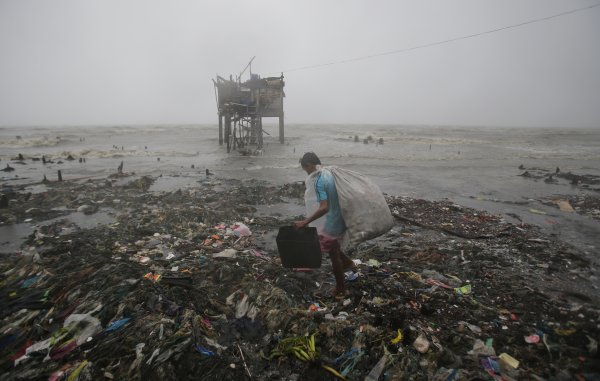 Witness the Aftermath of Typhoon Koppu in the Philippines
Next Up: Editor's Pick