What to Know About the Historic 'Paris Agreement' on Climate Change

Negotiators from nearly 200 countries gathered in Paris Saturday reached the world’s most significant agreement to address climate change since the issue first emerged as a major political priority decades ago.

Here are answers to five key questions about the agreement:

What does the Paris Agreement do?

The Paris Agreement is meant to signal the beginning of the end of more than 100 years of fossil fuels serving as the primary engine of economic growth and shows that governments from around the world take climate change seriously. The inclusion of both developed and developing countries, including those that rely on revenue from oil and gas production, demonstrates a unity never seen before on this issue.

The deal requires any country that ratifies it to act to stem its greenhouse gas emissions in the coming century, with the goal of peaking greenhouse gas emissions “as soon as possible” and continuing the reductions as the century progresses. Countries will aim to keep global temperatures from rising more than 2°C (3.6°F) by 2100 with an ideal target of keeping temperature rise below 1.5°C (2.7°F).

The deal will also encourage trillions of dollars of capital to be spent adapting to the effects of climate change—including infrastructure like sea walls and programs to deal with poor soil—and developing renewable energy sources like solar and wind power. The text of the agreement includes a provision requiring developed countries to send $100 billion annually to their developing counterparts beginning in 2020. That figure will be a “floor” that is expected to increase with time.

The agreement gives countries considerable leeway in determining how to cut their emissions but mandates that they report transparently on those efforts. Every five years nations will be required to assess their progress towards meeting their climate commitments and submit new plans to strengthen them.

Is the agreement binding?

The legal nature of the deal–whether it will be binding–had been a hotly debated topic in the lead up to the negotiations. The agreement walks a fine line, binding in some elements like reporting requirements, while leaving other aspects of the deal—such as the setting of emissions targets for any individual country—as non-binding.

How did the negotiations work?

The Paris Agreement marks the culmination of years groundwork laid in the aftermath of a failed attempt at achieving a previous global agreement at a 2009 climate conference in Copenhagen. Countries settled on a bottom-up approach allowing each nation to submit its own plan to reduce greenhouse gas emissions rather than trying to agree on a one-size-fits-all strategy, greatly simplifying the job of negotiations.

After several less-publicized meetings, negotiators from the nearly 200 countries gathered on November 30 at a conference center in Le Bourget airport just outside Paris. A week and a half of talks yielded a draft agreement, after which the most intense portion of the negotiations began on Thursday. Delegates met in closed-door meetings through the night and presidents called their counterparts in other countries. The French leaders running the conference followed along, revising the text of the draft agreement as necessary. The final agreement ultimately required compromises from every party.

Who were the key players in getting a deal?

France, the host country, has received near-universal praise for its handling of the conference. The leaders of host countries in climate negotiations write the actual text of agreement by listening to the concerns of all the countries present. By all accounts, France deftly accounted for all those concerns allowing for passage of the deal without objection.

Leadership from the U.S., China and India also played a key role in facilitating the agreement. All three countries have acted as road blocks in past attempts to achieve climate deals, but in the lead up to this conference each made strong commitments to reduce their own greenhouse gas emissions and to contribute to a positive discussion in Paris.

Vulnerable small island countries, particularly the Marshall Islands, also emerged as the surprise power players of the conference. Representatives from countries in this group pushed hard for negotiators to set a more ambitious climate target and largely succeeded. A “high-ambition coalition” led by the Marshall Islands gained support from more than 100 countries, including the U.S., Brazil and members of the European Union, and their efforts resulted in the inclusion of long-term targets and a lower “ideal” warming target.

Representatives from the vast majority of countries party to the agreement walked away satisfied with the new climate deal. In a comment period following the adoption, delegate after delegate praised the text as a generally fair-and-balanced representation of what all countries wanted—despite significant compromises on issues like how to handle losses and damages related to climate change.

The agreement also lived up to the demands of many environmental activists, who were most please that the deal included a long-term emissions reduction goal, the five-year review cycle and strong measures to ensure transparency. John Coequyt, the Sierra Club’s director of federal and international climate campaigns, said the agreement included “all the core elements that the environmental community wanted.”

Others criticized the deal as too weak and for not providing enough support for developing countries. Friends of the Earth U.S. President Erich Pica said the agreement is “not a fair, just or science-based deal” because it fails to adequately address losses due to climate change in the most vulnerable countries. Some conservatives in the United States who disagree with the science behind climate change also criticized the deal. (The agreement was carefully crafted to avoid needing approval from U.S. Congress). 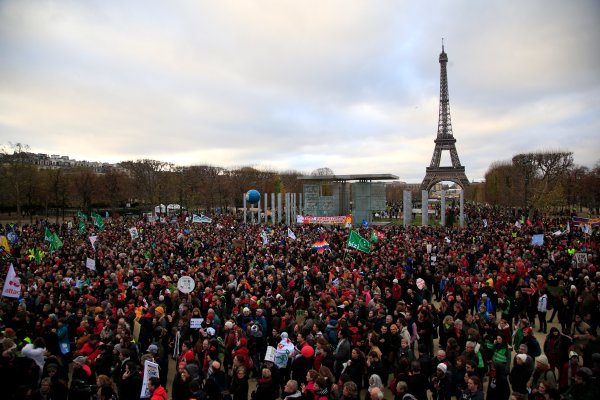