These Are the 10 Best Restaurants in the World

What’s the greatest restaurant in the world? Top chefs and those who fork over their fortunes to eat their food are fascinated with the question. Now a new ranking has emerged to provide some extra fodder to the debate.

According to La Liste, a group convened by the France’s Foreign Minister and supported by the country’s tourism board, the top restaurant in the world is the Restaurant de l’Hôtel de Ville in Crissier, Switzerland. New York City’s Per Se has grabbed the number two spot, according to the new ranking. Tokyo’s Kyo Aji comes in third.

The ranking’s creators shared their global top 10 and top 100 American restaurants with TIME.

Top 10 Best Restaurants in the World

Devoted five-star diners will note that only one restaurant in La Liste’s top 10 can be found on the current leading ranking of top restaurants, the World’s 50 Best list. And there’s good reason. No French restaurant has broken into the top 10 of that list, sponsored by water-maker San Pellegrino, in the last four years. La Liste featured three French restaurants in its top ten. France’s exclusion from the upper rungs of the World’s 50 Best has angered leading French cultural figures proud of their country’s culinary tradition. Partly in response to this disappointment, French Foreign Minister Laurent Fabius launched the new initiative to promote French tourism and fine dining.

“The angle was not to promote French [restaurants] per se,” says La Liste’s Antoine Ribaut, “but to be objective, because we trust we have the good fine dining.” Ribaut says the World’s 50 Best list is not objective. Several media outlets have pointed out that the lack of transparency does raise questions about how that list, sponsored by San Pellegrino, is decided. (Ribaut has consulted for Time Inc. His father Jean-Claude, the long-time food critic for Le Monde, contributed to the project.)

“Given that this list is based on personal experiences it can never be definitive, but we believe it is an honourable survey of current tastes and a credible indicator of the best places to eat around the globe,” the World’s 50 Best says on the organization’s web site.

“The thing with 50 Best is that the French were underrepresented, for sure,” Antoine Ribaut says, “but the reason why they were underrepresented was because there was a murky financial pressure for restaurants.” The funding for La Liste, it should be noted, came largely from private French cultural institutions. Swiss food giant Nestle is also a supporter.

Unlike the World’s 50 Best list, which is drawn from private surveys of chefs and those who frequent leading restaurants, La Liste is sourced from publicly available data, aggregating scores from 200 food guides and online review sites to produce what it hopes will be seen as an accurate, unbiased report of the best in the world.

The ranking is based on scores and reviews from a wide range of international sources: Michelin stars, yes, but also New York Times and Washington Post reviews, Zagat and Yelp ratings, Forbes and AAA travel guides and James Beard awards in the U.S., plus the cultural equivalents of these institutions in other countries (with help from foreign advisers).

Ribaut and his team then created an algorithm to assign these scores a value on a scale of 100; food factored in as 80% of the score, while ambiance, décor and wine combined factored in as 20%. If there was a positive review that didn’t include a numeric score, Ribaut counted it as a small bonus.

The full list of 1000 restaurants will be released Thursday at LaListe.com.

Correction: An earlier version of this article misidentified the location of Manresa; it is in Los Gatos, Calif. 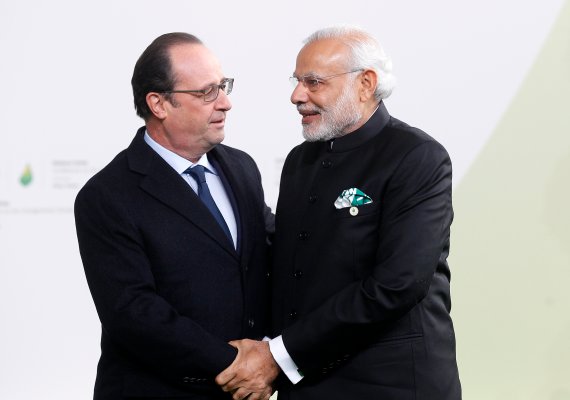 Why India Plays a Key Role in Paris Climate Talks
Next Up: Editor's Pick