Banning Gun Sales to People on No-Fly List May Not Be Constitutional, Experts Say

A passenger shows a boarding pass to a TSA agent at a security check-point at Seattle-Tacoma International Airport in SeaTac, Wash, March 24, 2015.
Elaine Thompson—AP
By Josh Sanburn

On Thursday, Connecticut Gov. Dannel Malloy announced plans to issue an executive order barring anyone listed on federal terrorist watch lists from purchasing a gun in the state. But while the idea of “no fly, no gun” has found growing support following the mass shooting in San Bernardino last week, including that of President Obama, experts say such a policy may be unconstitutional.

The problem lies with the terrorist watch lists themselves, which are both secret and routinely updated without the typical due process given to those who are accused of breaking the law, such as court proceedings. Without a trial, the government can add anyone to watch lists who it believes may be a threat to national security—and exactly how the government defines such a threat isn’t even public knowledge.

Such an ad-hoc approach to these lists raises fewer concerns when they are merely used to keep track of potential suspects, but becomes more legally problematic when their many members are denied certain rights or privileges. The no-fly list, which includes individuals deemed too dangerous to board a plane, is just one of several lists reportedly used by the government, but is often the one that gets the most attention. The Wall Street Journal has reported that there are 16,000 names on the list, with the larger Terrorist Screening Database including 420,000 names.

In 2014, a federal court found the no-fly list unconstitutional because it denied those listed due process in challenging their inclusion. Since then, the U.S. government has said it’s providing more information to those who are on the list, potentially allowing persons banned from air travel to appeal and get their names removed. The ACLU, however, is still challenging the list in court, arguing that the government isn’t handing over enough information about how it populates those names. The civil liberties organization is also against barring those included from being denied guns for similar reasons.

“We are opposed to the use of terror watch lists, as presently constituted, to screen gun purchases,” said ACLU National Security Project Director Hina Shamsi. “We believe the lists are deeply flawed.”

Several constitutional law scholars say it’s these same due process concerns that make it unlikely a ban on gun purchases for those on the no-fly list would be legally permissible.

“We generally don’t take away rights based on suspicion,” says UCLA law professor Eugene Volokh. “The government has to have some proof. If all the government can say is we suspect you of supporting terrorism, that’s not enough.”

Goitein agrees the policy raises serious constitutional concerns, noting that individuals can make the list for a number of reasons that aren’t always made clear.

“It’s not just a question of due process and having the right to clear your name,” Goitein says. “The person also needs to be shown to be a proven threat of violence. And I think that bar is a low one.”

Saul Cornell, a Fordham University history professor who specializes in the Second Amendment, says it’s possible that other states will consider barring individuals on the no-fly list from purchasing guns despite these issues. But Second Amendment restrictions are routinely challenged in court, and Connecticut’s potential executive action will almost certainly see lawsuits from gun advocates.

“If you sneeze you get litigation in this area,” Cornell says. “It’s a no-brainer it’ll be challenged. Whether it survives is going to be very interesting.” 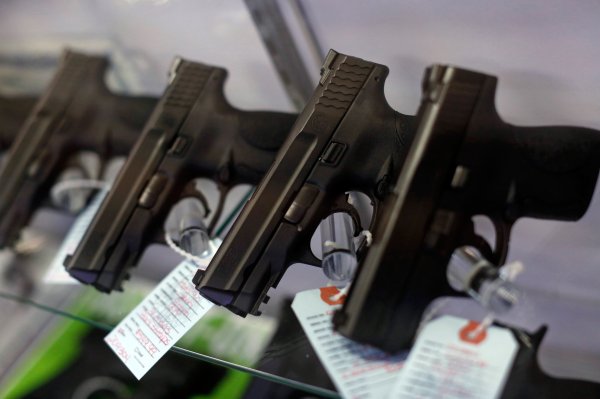 Gun Sales Spike Across the U.S.
Next Up: Editor's Pick