The loading screen for the South China Morning Post (SCMP) app is arranged for a photograph on a smartphone, right, next to a tablet displaying an SCMP article on billionaire Jack Ma, chairman of Alibaba Group Holding Ltd., in Hong Kong, China, on Sunday, Nov. 29, 2015. Ma is in talks to buy a stake in the publisher of Hong Kong's South China Morning Post, according to people familiar with the matter, in what could make him the latest Internet-industry tycoon to pursue the revival of a traditional newspaper.
Bloomberg—Bloomberg via Getty Images
By Daniel White

Alibaba, the Chinese e-commerce giant, is buying an influential Hong Kong English language newspaper in a bid to improve media portrayals of China.

The New York Times reports that the Alibaba Group agreed Friday to buy the media assets of of the SCMP group, publishers of the South China Morning Post—an award winning newspaper that enjoys more independence and freedom than China’s state-run media.

Alibaba executives said the deal was aimed at fixing China’s image and correcting what they called the “negative” portrayal of China by Western media outlets, according to the Times. The executives said such negative perceptions were adversely affecting the company’s share price. “What’s good for China is also good for Alibaba,” Alibaba’s executive vice chairman Joseph C. Tsai told the Times.

The 112-year-old paper was sold in a deal worth an estimated $100 million. For Alibaba, the purchase represents a relatively meager expense. The company, which is making its first leap into the political realm, brings in more than $12 billion in annual revenue.

While a print circulation of 100,000 makes the South China Morning Post somewhat small, according to the Times, but its influence in the West is magnified by its closeness to China and the fact that its in English.

Despite Alibaba’s stated objective of improving China’s image, executives also say they have no intention of interfering with or censoring the newspaper.

“We’ll operate on principles,” Joseph C. Tsai, Alibaba’s executive vice chairman, told the paper. “We’ll let the editors make their judgment on what to publish and not to publish. I can’t think of anything being off-limits.” 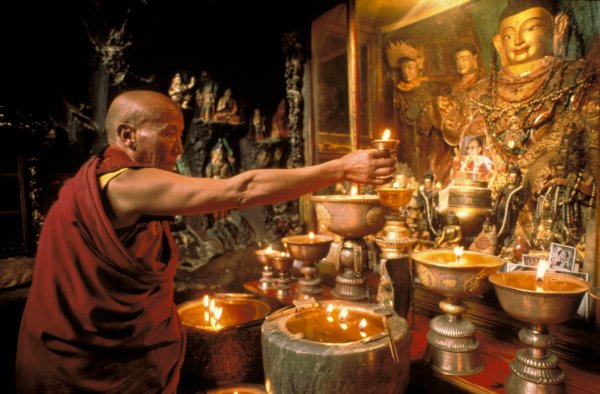 China's Database of Living Buddhas
Next Up: Editor's Pick