Republican presidential candidate Donald Trump said Thursday that he has postponed his trip to Israel to meet with Prime Minister Benjamin Netanyahu, just a day after reports of the meeting surfaced.

Trump was scheduled to meet with Netanyahu on Dec. 28 during a trip to Israel, in the tradition of many presidential hopefuls. The Israeli Prime Minister has said he would speak with any presidential candidates who visit Israel.

But Netanyahu had already begun to distance himself from Trump’s recent inflammatory comments about barring Muslims from entering the U.S., disagreeing with the remarks publicly and stating that Israel “respects all religions,” the AP reports.

In this Thursday morning Tweet, Trump did not give a reason for postponing the meeting.

“Overall, I think the prime minister would be happy if this visit would be canceled,” Alon Pinkas, a former Israeli consul-general, had told the AP on Wednesday.

Trump has caused turmoil among Republicans over his call for a temporary ban on Muslims entering the U.S. after the mass shooting by a Muslim couple that killed 14 people in San Bernardino, Calif.

The businessman has stayed ahead in polling, and annoyed many American Jews last week after speaking to a gathering of Jewish donors. He was booed after refusing to endorse Jerusalem as the undivided capital of Israel. He then went onto make remarks that promoted Jewish stereotypes. “I know why you’re not going to support me: you’re not going to support me because I don’t want your money,” Trump said. “You want to control your own politician.” He also said, “I’m a negotiator, like you folks.” 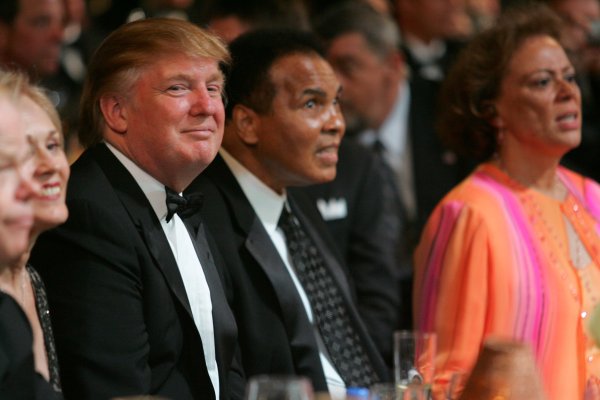 Muhammad Ali Weighs In On The Donald's Muslim Ban
Next Up: Editor's Pick