A teenager and a young man in Australia have been charged with conspiring to commit an act of terrorism, after they were arrested Thursday.

Police told reporters that the men, ages 15 and 20, were plotting with three others already detained, to stage attacks on random civilians and at Australian government complexes, including the Australian Federal Police’s headquarters in Sydney, reports Reuters.

Police arrested the men in raids in Sydney early Thursday, acting in part on evidence seized during an earlier round of raids this time last year.

The two men in question were involved in “formulating documents connected with preparations to facilitate, assist, or engage a person to undertake a terrorist act,” according to a police statement.

Australia, which some experts say is both a breeding ground and target for Islamist jihadists, has taken stringent measures in the past year to mitigate the threat of terrorism. Earlier this month, the country passed a bill that would strip dual nationals of their Australian citizenship if they engage in or are suspected of activities relating to terrorism.

The arrest of the two men comes almost exactly a year after an Islamist extremist took 18 people hostage at a chocolate café in Sydney. The siege, which authorities described as a terrorist attack, left three dead, including the perpetrator. 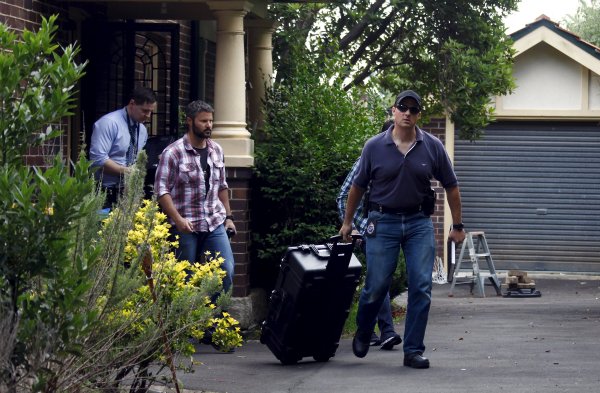 Home of Bitcoin 'Founder' Is Raided by Australian Police
Next Up: Editor's Pick