As incendiary as Donald Trump’s proposal to block Muslims from coming into the United States is, it isn’t enough to overcome a key dynamic inside the Republican presidential contest: the candidates’ own self-interest.

Even the businessman and former reality television star’s staunchest critics have learned better than to predict that his latest gambit will be his downfall. Despite GOP leaders’ overtures to the contrary, Trump has taken one (or 100) steps too far to ever earn their support. The Republican front-runner’s serial embrace of offensive rhetoric and extreme policy has only solidified his support among conservative voters. But equally important, it has hardened opposition to Trump among the majority of voters still divided between the 13 remaining candidates.

Therein lies the problem. It appears likely this race will come down to Trump and one or two alternatives. And all the would-be alternatives know that if they’re the last anti-Trump candidate standing, they’ll almost surely win. So why should they get out?

“There are a significant number of campaigns that can legitimately make a case to a donor to wait and see how this shakes out,” former Republican National Committee Chief of Staff Mike Shields said, explaining why a consolidation of the field is unlikely to happen anytime soon.

Since August, when Trump first broke the 20% mark in an average of national polls, his support has been largely consistent, fluctuating slightly as other flavors of the month (such as Carly Fiorina and Ben Carson) have risen and fallen. His favorability rating has been even more stable, standing at 34% in the Pollster.com average. But more importantly, so has his unfavorable rating, now at 57%. Trump consistently leads surveys on which candidate voters would not support.

Efforts to take down Trump, through ad campaigns and tough statements, have accomplished little to nothing.

The other candidates all believe that Trump, who does not conduct his own internal polls, has made a fatal strategic error. By focusing on staying in first place in early polls, they say, he has ignored deeper data that shows his rhetoric and positions alienates too many Republicans to actually win a majority of the party. The difference between 30% and 51% is where they believe they will win.

When former Wisconsin Gov. Scott Walker dropped out in September amid a financial crunch, he encouraged many of his rivals to do the same in order to consolidate the field—a message he repeated Tuesday.

“I think in the end, he has a plurality but not a majority of the votes within the process,” Walker said in Wisconsin. “Eventually, I hope others do what I did, which is suspend their campaigns, because if you have a large field, a plurality can win, but if you have a small field, more people will focus toward the majority opinion.”

“I think until March 1 everyone will play on the assumption that everyone else has a glass jaw,” veteran Republican adviser Ben Ginsberg told TIME, saying the field will narrow then. But will it narrow enough? Only time will tell, Ginsberg said. “The only thing that’s consistent is you get into trouble making predictions.”

Indeed, because of the increasingly front-loaded and proportional GOP calendar, many in the party establishment believe Trump is incapable of securing the 1,237 delegates (50%+1) needed to win the nomination.

GOP mega donors have kept their fortunes on the sidelines, wary of attracting the attention of the bombastic candidate and awaiting a strategy to defeat Trump that works.

“The concept that the gross rating point [a television advertising metric] can trump the clearly articulated message is a fundamental fallacy,” said Phil Musser, an unaffiliated GOP strategist. “This may be the ultimate election where money can’t buy you love—or hate.”

First, though, this needs to become a two- or three-person race. And so far, only three of the 17 candidates who started this campaign have exited. That means the 7-in-10 Republicans who want someone other than Trump are diving their support between candidates stuck in the single digits or teens.

And that’s simply not winning math. 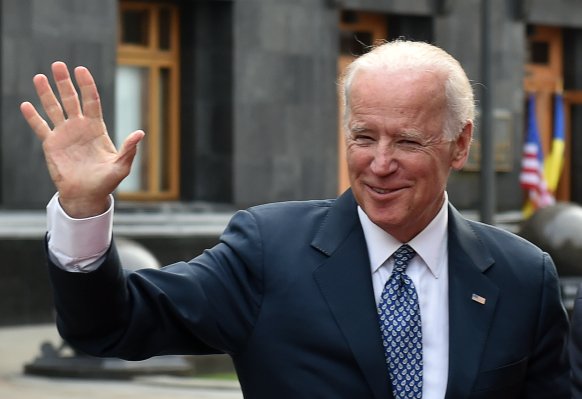 Joe Biden Says He Made the 'Right Decision' Not to Run for President
Next Up: Editor's Pick