This U.S. President Actually Survived in the Wilderness

President Roosevelt, in 1915, pointing at a map of South America towards the area explored during the Roosevelt-Rondon Scientific Expedition in Brazil as another man looks on.
Universal History Archive / Getty Images
By Lily Rothman

By the standards of the modern presidency, President Obama was roughing it during his appearance on the the reality show Running Wild With Bear Grylls, airing Thursday. In an effort to spotlight the effects of climate change on the nation’s northern wilderness, Obama allowed the survivalist TV star to do decidedly un-presidential things like feed him a bear’s leftovers.

Harrowing stuff, but not exactly a death-defying, stranded-in-the-wild situation. At least one other U.S. president, however, knew how the real thing feels. Completely unsurprisingly, that president was Teddy Roosevelt, the early 20th-century leader famous for his devotion to the great outdoors and ideals of rugged masculinity.

Roosevelt’s most perilous expedition came when he was invited to speak in Brazil in 1913, as he was struggling to recover his reputation after losing the 1912 election. Once he arrived, the Brazilian Foreign Minister offered Roosevelt and his son Kermit places on an expedition exploring the appropriately named River of Doubt, a piranha-filled waterway that ran through malarial climates.

Along the way, Roosevelt was nearly bitten by a venomous snake, members of his party were attacked by the area’s indigenous peoples and Kermit faced his own mortality, as author Candice Millard later explained for TIME:

Though Kermit’s expertise would help most of the explorers make it home safe, Roosevelt was weakened by the tropical illness and infections he contracted on the journey. He died suddenly only a few years later, with doctors at the time positing that his illness in Brazil was a contributing factor. But, as TIME reported in 1935, the expedition was in many ways a success. Roosevelt’s account of the terrain proved to be accurate, putting an end to a joke that the river’s name referred to the question of whether it really existed. And the Brazilian government decided to rename the river after Roosevelt. It is now known as Rio Roosevelt or Rio Teodoro.

When the Roosevelt Memorial Hall at the American Museum of Natural History opened in 1936, it included a “a towering mural painted by William Andrew Mackay” in which “a comely female figure in Grecian dress, representing the river, is pouring a torrent from a vase. In the background is a map with the river labeled ‘Rio Téo-doro.’ Below, kneeling at a portable table, Kermit Roosevelt keeps a record of the expedition. In the centre two expeditionists are pushing aside jungle growth so that a burly, square-headed figure in khaki breeches and boots may gaze with hat in hand upon his river.”

Read more from 1935, here in the TIME Vault: Rio Teodoro

For your security, we've sent a confirmation email to the address you entered. Click the link to confirm your subscription and begin receiving our newsletters. If you don't get the confirmation within 10 minutes, please check your spam folder.
Most Popular on TIME
1
How the U.S. and U.K. Failed Their Coronavirus Responses
2
U.S. Customs Seize Human Hair Weaves From Chinese Prison Camps
3
Mississippi Retires State Flag in Quiet Ceremony 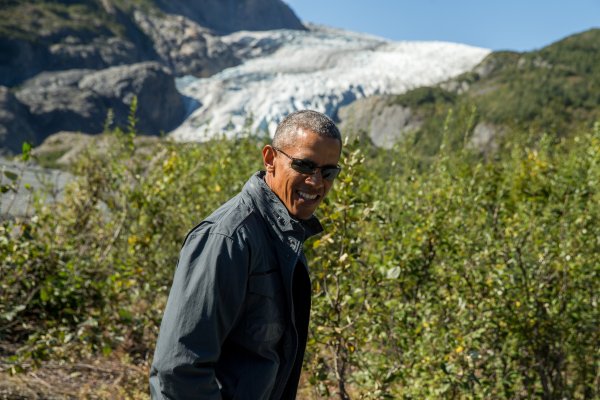