There's Another Portrait of Angela Merkel and It Was Painted by George W. Bush

German Chancellor Angela Merkel was named TIME Person of the Year on Wednesday, with a cover made from an oil portrait by award-winning artist Colin Davidson. But Davidson isn’t the only one with a high-profile painting of the German leader: TIME’s 2000 and 2004 Person of the Year, former President George W. Bush, has also put Merkel to canvas.

Bush famously started painting when he left office, and his rendering of Merkel is among his works on display at the George W. Bush Presidential Library in Dallas, Texas. He unveiled it along with other paintings of world leaders in 2014 in an exhibit titled, “The Art of Leadership: A President’s Personal Diplomacy.” The exhibit included paintings of more than two dozen world leaders, including Russian President Vladimir Putin, former British Prime Minister Tony Blair, and Merkel. He conceded at the time that he is “not a great artist,” but said he wanted to get better: “A whole new world has opened up.”

Here at center is Bush’s painting of Merkel, which he said was done in the “spirit of friendship.”

And here’s Davidson’s from TIME’s cover: 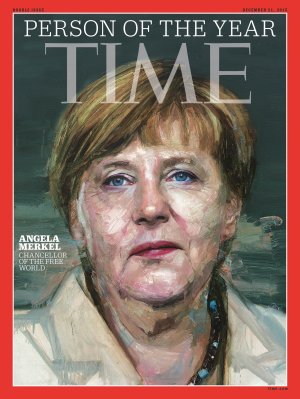 See Every Person of the Year in 15 Seconds
Next Up: Editor's Pick