Former California governor and US actor Arnold Schwarzenegger arrives at the Hotel Matignon prior to attend a meeting with French Prime minister Manuel Valls on December 08, 2015 in Paris, France.
Chesnot/Getty Images
By Megan McCluskey

Arnold Schwarzenegger is busy on a mission to terminate climate change, but that didn’t keep him from reaching out to one of his biggest fans on Wednesday.

After Reddit user Courser posted a heartwarming message about his brother Todd on the Reddit Bodybuilding forum on Tuesday, other users took action.

“My brother has severe learning disabilities and autism, but fell in love with the Arnold Schwarzenegger movies as a young man and took him on as an idol. Instead of giving up and letting his life make him blank and sedentary, he decided he would become a ‘bodybuilder,'” Courser wrote. “Even though he can’t read or write past a second grade level, he got himself into such good shape that he had a full time job. He worked as a groundskeeper until this spring, when he was diagnosed with terminal brain cancer (glioblastoma multiforme).”

He also said that although Todd has kept his spirits up during treatment, he isn’t doing so well. Courser explained that he wants to be able to give his brother the best gift he can imagine for his last Christmas, a personalized picture from his idol, Schwarzenegger, and asked for Reddit’s help to contact him.

People immediately began to upvote the post and tag Schwarzenegger (/u/GovSchwarzenegger) in it. Before long, it was the top post on Reddit and many were tweeting about it with the hashtag #HelpTodd.

Just eight hours after Courser originally posted, he received a message from the Governator himself. “I am still in Europe so I have to say this was an inspiring thing to wake up to. I’ve reached out to Courser but I wanted to let all of you know that you’re amazing. This is the power of [R]eddit to do great things, and I’m proud of all of you, even though you filled my inbox – because you filled my inbox,” the 68-year-old actor-turned-politician wrote.

Todd’s brother was incredibly grateful: “What a thing to wake up to this morning on this side of the pond, too. Thank you so much, Governor! I saw your message, and have sent an email. Thank you again! And I’m really sorry about your inbox. And twitter feed. I have no idea what happened, I was honestly just looking for an email address for someone in your office that might work. Thank you, thank you. I still can’t believe this. Thank you, and thank you Reddit!” 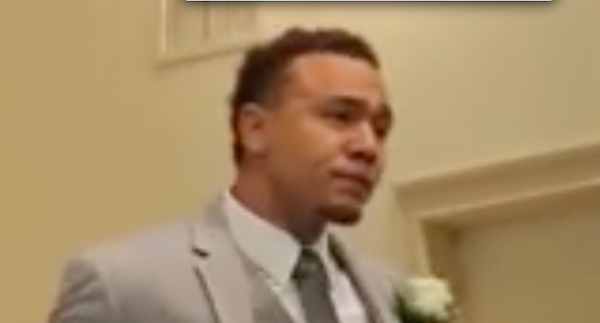 Video of Groom Crying on His Wedding Day Will Give You All the Feels
Next Up: Editor's Pick