Kareem Abdul-Jabbar: What Donald Trump and ISIS Have in Common

Donald Trump at the Sunshine Summit conference on Nov. 13, 2015 in Orlando, Fl.
Joe Raedle—Getty Images
Ideas
By Kareem Abdul-Jabbar
Abdul-Jabbar is a six-time NBA champion and league Most Valuable Player. He is the author of the new book, Writings on the Wall.

The terrorist campaign against American ideals is winning. Fear is rampant. Gun sales are soaring. Hate crimes are increasing. Bearded hipsters are being mistaken for Muslims. And 83 percent of voters believe a large-scale terrorist attack is likely here in the near future. Some Americans are now so afraid that they are willing to trade in the sacred beliefs that define America for some vague promises of security from the very people who are spreading the terror. “Go ahead and burn the Constitution — just don’t hurt me at the mall.” That’s how effective this terrorism is.

This is not hyperbole. Not a metaphor. Webster defines terrorism as “the use of violent acts to frighten the people in an area as a way of trying to achieve a political goal; the systematic use of terror especially as a means of coercion.”

If violence can be an abstraction — and it can; that’s what a threat is — the Trump campaign meets this definition. Thus, Trump is ISIS’s greatest triumph: the perfect Manchurian Candidate who, instead of offering specific and realistic policies, preys on the fears of the public, doing ISIS’s job for them. Even fellow Republican Jeb Bush acknowledged Trump’s goal is “to manipulate people’s angst and fears.”

The Federal Bureau of Investigation, however, defines terrorism as “the unlawful use of force or violence against persons or property to intimidate or coerce a government, the civilian population, or any segment thereof, in furtherance of political or social objectives.” Now, we don’t require by law that our candidates tell the truth. They can retweet (as Trump did) racist “statistics” from a white supremacist fictional organization that claimed 81% of murdered whites are victims of blacks, when the truth is 84% of whites are murdered by whites. They can claim (as Trump did) to have seen on TV thousands of Muslims in New Jersey cheering on 9/11, even though there is no evidence of this. They can say (as Trump did) Syrian refugees are “pouring” into the country when only 2,000 have come (out of 4.3 million U.N.-registered refugees). Then, when caught lying (as Trump has been over and over), they can do what every belligerent child does: deny, deny, deny.

While Trump is not slaughtering innocent people, he is exploiting such acts of violence to create terror here to coerce support. As I have written before, his acts could be interpreted as hate crimes. He sounds the shrill alarm of impending doomsday even though since 9/11, about 30 Americans a year have been killed in terrorist attacks worldwide — as The Atlantic pointed out, “roughly the same number as are crushed to death each year by collapsing furniture.” Trump’s irresponsible, inflammatory rhetoric and deliberate propagation of misinformation have created a frightened and hostile atmosphere that could embolden people to violence. He’s the swaggering guy in old Westerns buying drinks for everyone in the saloon while whipping them up for a lynching.

About 30,000 foreign fighters have gone into Syria to join ISIS, thousands of them from Europe and at least 250 from the United States. What most of us in these bountiful countries can’t understand is how our young, raised with such opportunity, choose to abandon our values to embrace a culture of pitiless violence. Before going, many of these recruits spend much of their time on social media being brainwashed by propaganda videos. One 23-year-old woman, a devout Christian and Sunday school teacher, was recruited via Skype. The recruiter spent hours with the lonely woman teaching her the rituals of Islam. Maybe that’s because, according to some psychologists, the brain’s default setting is simply to believe because it takes extra work to analyze information.

The same process works for Trump’s supporters. They are impervious to facts or truth because their (understandable) frustration and anger at partisan greed and incompetence have fatigued them out of critical thinking. Like deranged newscaster Howard Beale in Network, they are mad as hell and they aren’t going to take it anymore. To express their outrage, they have rallied around a so-called “outsider” with no political experience, no detailed policies, and whacky ideas that subvert the very Constitution that he would be required to swear to uphold. Electing him would be like asking the clown at a child’s birthday party to start juggling chainsaws.

But understanding and even having sympathy for his followers’ feelings of political impotence doesn’t excuse their dangerous behavior. There is never an excuse for people blindly following a leader who consistently lies to them, who exaggerates threats and who proposes remedies that are unconstitutional. It’s shameful enough that Trump’s solutions run contrary to American values, but it’s more shameful that his followers refuse to acknowledge it. Such brainwashed behavior is demeaning to them and harmful to the country. Perhaps that’s why Trump enjoys the endorsement of several white supremacist groups, one of which proclaimed on their website: “Heil Donald Trump—The Ultimate Savior” and called for him to “Make America White Again!” Don’t worry — he’s trying his hardest.

My manager Deborah Morales and I with Trump several years ago, before he forgot there are Muslim athletes
Provided by Kareem Abdul-Jabbar

Trump’s latest enemy du jour are Muslims. He’s the schoolyard bully rallying classmates to make fun of the skinny kid with glasses. When President Obama said that “Muslim-Americans are our friends and our neighbors; our co-workers, our sports heroes,” Trump quickly tweeted: “What sport is he talking about, and who?” The press immediately provided him with a list, as well as photos of Trump with prominent Muslim-American sports figures, including Shaquille O’Neal, Mike Tyson, Muhammad Ali and, yes, me. What makes his statement even more insidious is the suggestion that, even if there were no Muslim sports heroes, Muslims would somehow be lesser people, less worthy. This cruel and dim-witted thinking is not the stuff presidents are made of.

Trump’s claims that he might support registering Muslims as well as call for a ban of Muslims from entering the United States — even U.S. citizens abroad — have elevated him to the level of a James Bond super-villain. And like those villains, he is doomed to failure. Even former Vice-President Dick Cheney condemned Trump: his proposals go “against everything we stand for and believe.”

There’s absolutely no evidence that his unconstitutional ideas would help in any way—quite the opposite. Secretary of Homeland Security Jeh Johnson criticized Trump’s proposal as “irresponsible, probably illegal, unconstitutional and contrary to international law, un-American, and will actually hurt our efforts at homeland security.”

One of my favorite poems is “The Second Coming” by W.B. Yeats, in which he describes, in a chillingly obtuse and mystical way, a second coming — not of Christ, but of something much darker and sinister:

And what rough beast, its hour come round at last,/Slouches toward Bethlehem to be born?

When I read the description of the beast, it’s “gaze blank and pitiless as the sun,” I can’t help but think of Trump and his cynical strategy of using misinformation, half-truths and deception in order to gain access to a position that should only be held by those who would be repulsed by that strategy.

Indeed, what rough beast slouches toward Washington to be born? 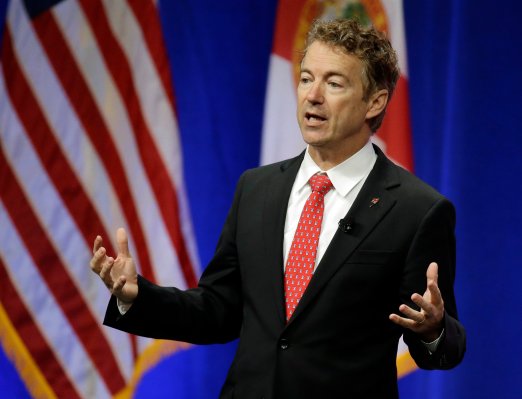 Let's Destroy ISIS — Not the Constitution
Next Up: Editor's Pick