These leaflets, meant to warn Japanese civilians of impending firebombing and expose the weakness of the Japanese military to erode morale, were donated by Maurice Picheloup of the 39th bomb group. Picheloup took part in a night raid over Japan on August 14–15. Returning to base they received word of the end of the war.
Courtesy of The National WWII Museum, Gift of Maurice Picheloup, 2002.252.006.
By Lily Rothman

Weeks would pass after the bombings of Hiroshima and Nagasaki before the official end arrived for World War II—and, during that time, even though the war had been effectively won, the incendiary air raids that had been such a large component of U.S. military strategy in Japan did not cease.

On Aug. 14–15, the very night before Emperor Hirohito would announce the impending surrender of his nation, a final firebombing raid went out on the city of Isesaki. One of the crewmen on that raid was First Lieutenant Maurice Picheloup, who held on to some souvenirs of that time—leaflets dropped to warn Japanese citizens of the consequences of a failure to surrender, which went on display over the weekend as part of a new exhibition at the National World WWII Museum in New Orleans, Road to Tokyo.

Picheloup told the museum that the crew expected all along to be called back, aborting the mission. “That we would once again be burning relatively small cities was abhorrent to all of us,” Picheloup said, “despite the fact that these target cities had been warned by leaflets that they would be bombed if their leaders did not stop the war.”

But, as their B-29 approached its target, the code to abort (the word “Utah”) did not come. It was not until after they had carried out their original orders, after the bombs had been dropped, that the code word came.

Here’s an English translation of a similar leaflet’s contents, dating from that time as well:

TO THE JAPANESE PEOPLE:

America asks that you take immediate heed of what we say on this leaflet.

We are in possession of the most destructive explosive ever devised by men. A single one of our newly developed atomic bombs is actually the equivalent in explosive power to what 2000 of our giant B-29’s can carry on a single mission. This awful fact is one for you to ponder and we solemnly assure you it is grimly accurate.

We have just begun to use this weapon against your homeland. If you still have any doubt, make inquiry as to what happened to Hiroshima when just one atomic bomb fell on that city.

Before using this bomb to destroy every resource of the military by which they are prolonging this useless war, we ask that you now petition the Emperor to end the war. Our President has outlined for you the thirteen consequences of an honorable surrender: We urge that you accept these consequences and begin the work of building a new, better, and peace-loving Japan.

You should take steps now to cease military resistance. Otherwise, we shall resolutely employ this bomb and all other superior weapons to promptly and forcefully end the war. 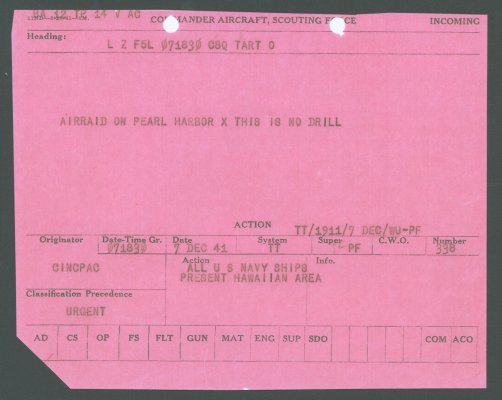 See the Actual Telegram That First Spread the Word About Pearl Harbor
Next Up: Editor's Pick