A Brief History of Deafness: How Treatment and Attitudes Have Evolved Over 3 Millennia

An estimated 10 per cent of the world’s population is, to some degree, deaf. That is 700 million individuals, ranging from those who have mild hearing loss and may or may not rely on hearing aids or lip-reading, to those who communicate using sign language and are part of a diverse Deaf culture.

Yet, despite its existence, there is little reference to deafness by historians or archaeologists, except for those focused on the study of disability. How far back can we look for evidence of deafness? Let us start by looking at some of the first references to deafness in the historical record.

The earliest written record of hearing loss is believed to date from 1550 BC in Ancient Egypt. The Ebers Papyrus offers a remedy for ‘Ear-That-Hears-Badly’: injecting olive oil, red lead, ant eggs, bat wings and goat urine into the ears. Whether ‘Ear-That-Hears-Badly’ refers to temporary hearing loss caused by simple wax build up, which may have actually been treatable with olive oil (although perhaps not ant eggs), the Ancient Egyptians were instructed to be kind to disabled individuals, including the deaf.

In Greece, attitudes were informed by the opinions of individuals, such as Aristotle and Plato, who around 350 BC wrote that the ability to reason was intrinsically linked with the ability to speak and therefore individuals who were deaf ‘from the first’ (either from birth or before they learned to speak) would inevitably be unintelligent. This attitude prevailed throughout much of history and those who were unable to speak, including many deaf individuals, were rarely considered independent adults with access to full civil liberties.

It is Plato who also gives us the first reference to sign language, in his dialogue on language and reality, Cratylus: ‘If we had no voice or tongue, and wished to make things clear to one another, should we not try, as dumb [mute] people actually do, to make signs with our hands and head and person generally?’ Despite recognising that people communicate through sign, its value is not acknowledged.

The earliest reference to specific signs, rather than just the act of signing, actually comes not from those used by deaf individuals but by monks. In the early 10th century, monks in Burgundy created a series of hand signals to communicate without speaking in order to keep their strict vows of silence. Early observers noted that the signals ‘would have been sufficient if they lost the use of their tongues’ and Cluniac sign language, as it came to be known, had an enormous influence on monastic life throughout Europe. It is credited with being the inspiration for the manual alphabet (finger-spelling) developed by the Spanish Benedictine Pedro Ponce de Leon at the first deaf school in the mid-1500s.

There is written evidence of an aid for hearing going back to the Romans, albeit in the form of the consul, Hadrianus, cupping his hands behind his ears. However, the earliest mention of the creation of a hearing aid comes in the Magiae Naturalis of 1588 by the Neapolitan polymath Giambattista della Porta, in which he describes horns shaped like the ears of animals known to have excellent hearing (though this may be an attempt to create something more akin to a telescope for sound). The first ear trumpets were developed by Paolo Aproino, a pupil of Galileo’s, in the 1610s, although they were not in common use until the end of that century.

Thus, we have written evidence for treating hearing loss, early sign language, hearing aids and some changing attitudes to deaf individuals dating back to 3,500 years ago. But what about before then?

When it comes to studying the skeletal remains of individuals from the distant past for evidence of deafness, we are limited to conductive hearing loss and only to those cases that resulted in bony changes that will survive after death (with the exception of the mummy of Pum II, who had a perforated eardrum). Individuals with sensorineural hearing loss will leave no evidence of deafness after death and decomposition.

The earliest known example of skeletal evidence associated with hearing loss in humans dates back to more than 10,000 years ago. Many of those buried at Shanidar Cave, an archaeological site located on Mount Bradost in Iraqi Kurdistan, had external auditory exostoses (bony growths in the ear canal), which in two individuals is severe enough to have impacted on their ability to hear. However, in the same cave system, the date for deafness can potentially be pushed back even further to our close relatives, as Shanidar I – a Neanderthal skeleton dating to between 45,000 and 35,000 years old – has similar exostoses. There are also numerous examples in the more recent past of individuals with conductive hearing loss, either in one or both ears, being given unique burial treatments, such as a congenitally deaf Roman child from Britain, who was buried face down in a stone coffin, capped with roof tiles.

Deaf individuals were present in the past and probably in greater number than previously accounted for by historians and archaeologists, especially when we consider illnesses and injuries associated with hearing loss that are now preventable or treatable. We should encourage more research into understanding this common human experience. To paint the whole picture, researchers need to look at both the biological and the historical records.

Alison Atkin is a Doctoral Researcher in Osteoarchaeology at the University of Sheffield. @AlisonAtkin 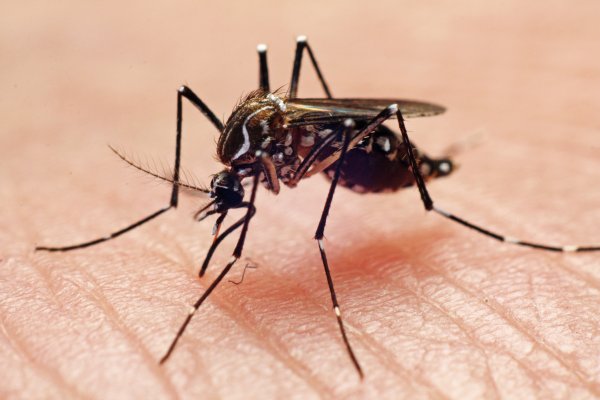 Hawaii Hit With Dengue Fever Outbreak
Next Up: Editor's Pick