The One Big Reason Why It Matters Who Invented Bitcoin

A pile of Bitcoin slugs sit in a box ready to be minted by Software engineer Mike Caldwell in his shop on April 26, 2013 in Sandy, Utah.
George Frey—Getty Images
By Alex Fitzpatrick

Australian police raided the home of one Craig Wright Wednesday, mere hours after two publications alleged that he is the secretive inventor of Bitcoin, a decentralized digital currency that’s become a darling of tech-savvy libertarians seeking an alternative to dollars, euros and so on.

Update: Wright is now claiming to be Bitcoin’s creator.

So far, Australian authorities say the raid against Wright has nothing to do with reports in Wired and Gizmodo suggesting he is Satoshi Nakamoto, Bitcoin’s pseudonymous creator. Those publications provided ample evidence tying Wright to Nakamoto. But they also stressed that Wright could be trying to trick journalists and the legions of other Bitcoin-watchers who have made a hobby of seeking Nakamoto’s true identity.

We’ve been down this road before. Newsweek reported last year that Bitcoin’s Nakamoto was Dorian Nakamoto, a California-based engineer. That Nakamoto refuted the claims and raised money to fund a lawsuit against the publication in response.

But beyond simple curiosity about the man behind the curtain, does it actually matter who invented Bitcoin? Only if you care about the future of a currency with a total value of about $6.3 billion as of this writing.

First, a quick primer on how Bitcoin works. Bitcoins are brought into existence — “mined,” in the parlance — by computers plugging away at very hard math problems. The system is designed so those problems get harder over time. That means it takes more processing power to mine one Bitcoin today than it did yesterday, and so on. The total number of Bitcoins that could ever be mined has a hard limit, which should theoretically bring some degree of price stability to the system.

Oh, and this is important for later: One of Bitcoin’s most important features is a public ledger of transactions.

Back to Bitcoin’s creator. Because it was easier to mine large amounts of Bitcoin in the currency’s early days, whoever invented Bitcoin would reasonably have a large stash of them. The early bird gets the worm, after all. Indeed, there’s a mysterious cache of 1.1 million Bitcoin, worth about half a billion American dollars as of this writing, visible on Bitcoin’s public ledger. The stockpile is widely believed to be controlled by Bitcoin’s inventor, though it never moves.

There could be a good reason the stash stays put. Wired reports the 1.1 million Bitcoin hoard could be tied up in a kind of digital trust fund that Wright only can fully access in 2020. When and if that happens, and Wright sells his stash, it will introduce a glut of supply to the Bitcoin market, likely wreaking havoc with the price of a currency that’s no stranger to wild swings in value.

Assuming Wright is indeed Bitcoin’s creator, that leaves him with an interesting conundrum. Bitcoin is beloved by free-market types because it has no central bank, no Fed, no Janet Yellen controlling the money supply. But if Bitcoin’s alleged creator really is sitting on a half-billion dollar stockpile of the stuff, he will have become the kind of central banker archetype that Bitcoin’s die-hard fans consider their personal boogeyman. Should Wright cash out and make off with a more widely-accepted currency like dollars, Bitcoin may never recover from the price shock triggered by the sudden glut in supply. Thus, the destiny of a supposedly decentralized currency may rest in the hands of one person — exactly the fate it was created to avoid. 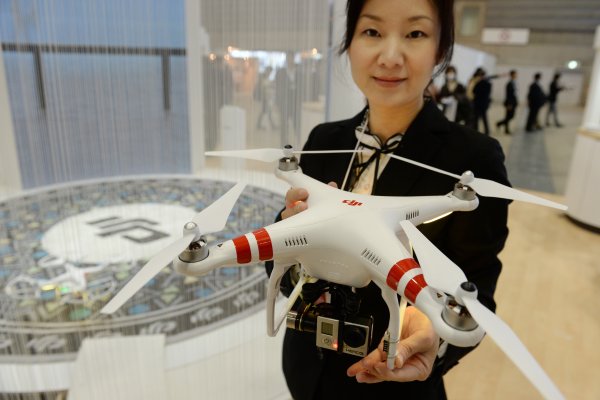 Drones Are Invading the Skies This Holiday Season
Next Up: Editor's Pick