Angela Merkel Beats Trump for Person of the Year

Donald Trump has been named a runner-up on TIME’s 2015 Person of the Year list, losing out to German Chancellor Angela Merkel and ISIS leader Abu Bakr al-Baghdadi. But he is the only American political figure on the list–a testament to his surprise influence on American politics this year. TIME’s Michael Scherer profiles Trump for the issue, putting him in the same category as Huey Long, Joseph McCarthy, and George Wallace. “Each terrified some and delighted others, testing the nation’s very identity,” he writes.

The fallout from Trump’s plan to ban Muslims from entering the United States entered its second day, sending candidates off-message as they were force to contend with his comments. All of the GOP candidates have pledged to support the eventual nominee—meaning, possibly Trump—but many found themselves trying to squirm out of the pledge Tuesday. Jeb Bush maintained he would support the nominee, but that it wouldn’t be Trump, an evasion embraced by many of his colleagues. Others, including Ted Cruz and Rand Paul said outright they’d back Trump, as they hope to appeal to his supporters.

Another runner-up on the Person of the Year list: The Black Lives Matter movement, which TIME’s Alex Altman writes has moved from a collection of protests to a burgeoning political movement

Joe Biden faces questions over his son’s work for a Ukrainian company. Marco Rubio undercuts the Affordable Care Act. And Trump plans a trip to Israel.

‘If I don’t win, for me, it will have been a total waste of time,’ he tells TIME’s Michael Scherer

House Approves Tighter Controls on Traveling to the U.S.

Anything with a percentage sign after it is gospel for him, TIME’s Philip Elliott writes

“What we need to see is a definitive statement from every candidate for the presidency about whether or not Mr. Trump is somebody they should vote for. I think their statements about this pledge they have taken to support Mr. Trump will speak volumes, as will the silence.” —White House Press Secretary Josh Earnest on Donald Trump’s comments on Muslim.

“I’m going to support whoever the Republican nominee is and I’m going to stand up for what I believe in as I do that.” —Speaker of the House Paul Ryan asked if he would support Donald Trump if he wins the GOP nomination

Joe Biden, His Son and the Case Against a Ukrainian Oligarch [New York Times] 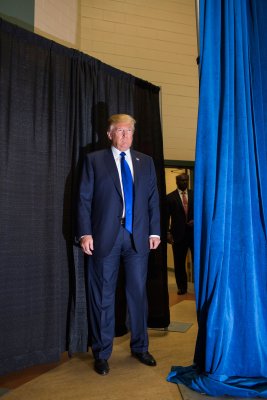