Scientists have long-held that global temperature rise needs to be kept to 2°C (3.6°F) by 2100 to avoid some of the most catastrophic effects of climate change. Preventing temperatures from crossing that threshold, along with halting the drought, extreme storms and food shortages that would come with crossing, had been the mission of negotiators gathered in Paris this month for a conference on climate change.

But in recent days a new push from countries vulnerable to climate change has revived a more aggressive goal: holding temperature rise to 1.5°C (2.7°F). The effort is gaining traction, to the surprise, and delight, of many observers gathered here even as they realize that the chances of actually meeting that target are slim under current estimates.

“You don’t get action without strong goals,” says Heather Coleman, climate change policy manager at Oxfam International. “That’s why so many organizations are pushing here for a long-term [1.5°C] goal.”

The target has long been a key point for small island states that face the possibility of losing their homelands even under a 2°C scenario. But the goal gained traction in Paris these few weeks after key statements from Canada, Germany and France. Even the United States has called for recognition of the goal in some form.

Read More: How the U.S. Became an Unlikely Hero at the Paris Climate Summit

“There have been political changes that make it more feasible,” says Rainforest Action Network Executive Director Lindsey Allen. “When there are fewer governments acting as obstructionists it makes it more feasible to talk about what the science actually says.”

The story of why key developed countries have thrown support behind the 1.5°C goal depends on who you ask. Many have cited a concerted push by the heads of state of some low-lying countries most vulnerable to sea level rise. Leaders of low-lying and atoll countries, many located in the South Pacific, are thought to have used meetings with leaders of developed countries to push for that goal. Obama declared the voice of the islands states “vital” after meeting with five of his counterparts from small islands but revealed few details about what was discussed.

“We hear the concerns of those countries, we think those concerns are legitimate, and so we’re looking for an appropriate way to deal with that,” said U.S. Climate Envoy Todd Stern in a press conference last week. (Stern later clarified that the U.S. would like to see a reference to 1.5°C but not a shift in the goal).

Others have argued that the developed countries are using an acknowledgement of 1.5°C as a token to offer vulnerable countries while taking away more substantive provisions that would help them at the same time. The U.S. and other developing countries have expressed strong opposition to provisions that would require vulnerable countries be compensated in the event of loss and damage due to climate change. Those provisions could put the U.S. and other top polluters on the hook for money leaders don’t want to spend. Supporting a 1.5°C goal, which wouldn’t be binding, allows the U.S. to look supportive without any real financial risk.

“They’re not talking about it in the context of a just agreement,” says Friends of the Earth President Erich Pica. “1.5 originally came up in the context of the small island nations trying to push ambition within an equity framework. Now, they’re using it to undermine differentiated responsibilities.”

In whatever form the 1.5°C goal may be included in a final agreement, countries are unlikely to meet it by most accounting. Current commitments from countries around the world would keep temperatures from rising more than about 3.5°C (6.3°F) by 2100. That’s a substantial improvement over the 4.5°C (8.1°F) anticipated temperature rise without any efforts to reduce greenhouse gas emissions, but it falls significantly short of the 2°C goal, let alone a 1.5 °C goal.

Research has suggested that reaching that goal by preventing future carbon emissions would require essentially stopping cold the use of fossil fuels in the coming decades. That’s a tall order that’s unlikely given the prevalence of oil, gas and coal in the world economy. But advocates for a more ambitious temperature goal say that the difference could be accounted for with carbon sinks that haven’t been considered. Natural carbon sinks like forests and reefs actually take carbon out of the air.

Others have suggested that future technology could allow the world to hit a 1.5°C target. But such developments are hard to predict. Many countries including countries like the U.S. and small island states have called for countries to reconsider their commitments to cut greenhouse gas emissions every five years as technologies that could stem emissions continue to advance.

Ultimately, advocates of stronger ambition argue that countries don’t actually need to meet the goal to make setting it worthwhile. “We would like the inclusion of 1.5 because it becomes our north star,” Allen said. 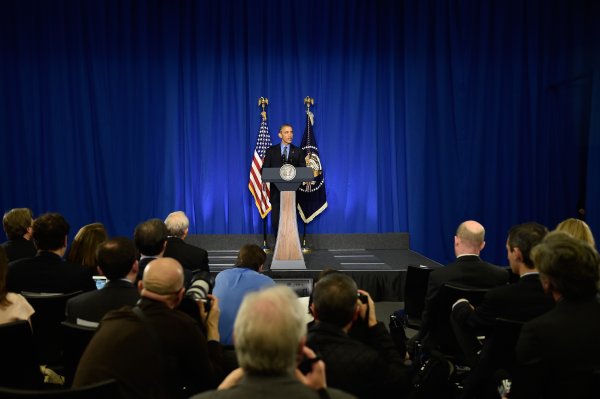 The U.S. Is an Unlikely Hero at the Paris Climate Summit
Next Up: Editor's Pick