Lionsgate Says You Haven't Seen the Last of the Hunger Games

By Eriq Gardner / The Hollywood Reporter

Lionsgate entertainment vice chairman Michael Burns compares Hunger Games to Harry Potter and says it will “live on and on and on.”

Burns spoke at the UBS Global Media and Communications Conference in New York as Lionsgate’s latest edition of Hunger Games continues to lead the box office with about $525 million earned worldwide. The film opened just over $100 million in its opening weekend, behind earlier segments. Burns said he was disappointed, but that it was a “high-class problem” to have.

Fans of the Katniss Everdeen franchise should definitely expect to see prequels.

“The one thing that kids say they missed (from the early Hunger Games films) was there was no arenas,” he said, referencing the stadiums where children killed each other and noting the prior films only covered the 74th and 75th competitions. “If we went backwards there obviously would be arenas.”

Burns also spoke how the studio aims to get more out from its other big franchises — including Twilight, The Expendables and Saw, nodding towards reboots, prequels or sequels for each of them.

He also spoke more generally about the company’s strategy and position in the marketplace.

In recent months, Lionsgate has been subject to much merger speculation, especially since February when billionaire media mogul John Malone swapped a portion of his stake in Starz for 3.4 percent in Lionsgate, taking a board seat in the entertainment studio. Then last month, Discovery Communications and Liberty Global — Malone owns more than a 25 percent in each — purchased its own 3.4 percent stake in Lionsgate. Analysts were quick to note synergies between the companies and Lionsgate’s stock price has subsequently been on a rollercoaster, reaching a high of $41 on Nov. 10 before crashing down to $33 territory at the end of Monday’s market.

Talking about Discovery and Liberty, Burns said, “If i was a betting man, I would expect to see more collaboration between the three companies.”

Asked about a possible merger with Starz, Burns commended Starz CEO Chris Albrecht as “executing the right strategy, emphasizing hit shows,” and praising their distribution deals. Burns added that as a Starz shareholder, Lionsgate is pleased. “We think it’s valuable,” Burns said about the Starz stake.

From the audience of investors, Albrecht shouted out, “Very valuable!”

Burns retorted, “He said we’re kissing cousins. Eventually, he’ll pay up for one of our shows.”

At the conference, Burns also called the company’s recent $200 million investment in unscripted producer Pilgrim studios (Ghost Hunters, Welcome to Sweetie Pie’s, Fast N’ Loud) an “overlooked asset” and touted the goals of having a third of Lionsgate production tied to television as well as its aim to “become a more global company.”

He also spoke about Lionsgate’s “secret sauce,” identifying it as the ability to really develop the projects it buys.

“I think the town has woken up to the fact when they sell property to our major competition, a higher price will be paid but it will never be made,” said Burns, noting turnover at the bigger studios.

Burns also considers Lionsgate to be “technology-agnostic,” not taking a position on skinny bundles vs. fat bundles, only to say that the studio represents “content mercenaries, really arm dealers,” able to sell whatever which way. 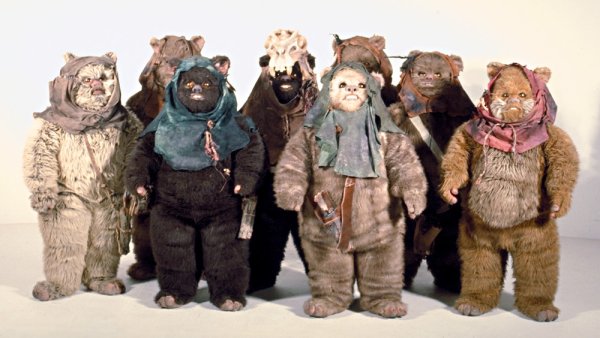 Jar Jar Binks and Ewoks Won't Be in Star Wars: The Force Awakens
Next Up: Editor's Pick