How the U.S. Became an Unlikely Hero at the Paris Climate Summit

Negotiators from the U.S. arrived in Paris last week for talks on climate change with a mandate from President Barack Obama to advance a strong deal to stem greenhouse-gas emissions. And with just days remaining before the conference is set to conclude, climate-policy experts say the U.S. has done just that.

Still, what makes for a meaningful agreement varies dramatically from country to country. For U.S. negotiators, a strong deal will require action from all countries and not place the liability for climate change solely on the developed world. That’s not to say that the U.S. shouldn’t do more than its less wealthy counterparts, but any deal should be “nuanced and flexible” in how it parcels out responsibility, U.S. climate envoy Todd Stern said at a press conference.

Flexibility, in the eyes of the U.S., would include a clear system for countries to revise and improve upon commitments made in the lead-up to the conference. Washington would like to see signatories come back to the drawing board every five years beginning as soon as 2020, while many developing countries like India want to be able to revise their commitments as they see fit.

The revision period would allow countries to change their plans as science advances and the effects of climate change become better understood, the U.S. says. The mechanism would help keep temperatures from rising 2°C (3.6°F) by 2100, the temperature scientists have identified as the threshold for some catastrophic effects of climate change. Even if countries meet their current commitments, global temperatures would be on track to rise by more than 3°C (5.4°F) in that time period. Unless those commitments tighten in the future, climate change will almost surely be catastrophic.

The U.S. also has demanded a robust system for developing countries to report transparently on their carbon emissions and the progress made toward reducing them. Countries like the U.S. and many European nations already follow uniform guidelines to track and report such information on an annual basis, and the U.S. hopes a deal will push developing countries in that direction. “You’re not going to get exorbitant detail,” Stern said of references to transparency in the text. “That’s a page or two, but it’s not a line or two.”

Read More: How Cities and States Took the Spotlight in Paris Climate Talk

Where the U.S. is arguably most eager to persuade other nations to follow its lead is on the contractual terms of the agreement. Negotiators representing many countries — including those in the influential European Union — have called for any agreement to be binding, meaning mandatory. The U.S. has tried to walk a fine line in hopes that some measures, like transparent reporting, will be binding while others will not. “That is an approach that is best suited to broad participation in this agreement, not only by the United States but also by any number of other countries,” Stern said.

The U.S. is likely to find a willingness to compromise on the mandates within any agreement, if only because the question may determine whether the deal has to be approved by a U.S. Congress dominated by Republicans resistant to acting on climate change — something that would be dead on arrival in Washington. All concerned at Paris understand the U.S. — the world’s largest economy and second largest emitter of greenhouse gases — needs to join the deal in full for it to be considered credible on the world stage. The U.S. failed to ratify the 1997 Kyoto Protocol after 95 Senators suggested they would vote against it if it were brought to a vote. But without the U.S. on board, the treaty’s impact was limited.

A lot has changed since then. Obama’s White House has worked to show the international community that the U.S. is serious about addressing climate change, starting with the Clean Power Plan, which aims to reduce U.S. carbon-dioxide emissions from power plants by 32% by 2030 from 2005 levels. It’s no accident that the high-level U.S. delegation sent to Paris includes four Cabinet Secretaries, one of whom is Secretary of State John Kerry. These efforts have given the Obama Administration the political capital necessary to forge a strong deal.

That’s a big change from past climate summits. “In Bali, when the U.S. needed to do revising, they needed to call back to Washington, D.C.,” said John Coequyt, the Sierra Club’s director of federal and international climate campaign, referring to a 2007 climate conference. “Here there’s a much stronger delegation.”

So strong, in fact, that it has outweighed concerns that Congress — or the next U.S. President, should he or she be Republican — undo whatever is done at Paris. Even a House vote earlier this month to repeal the Clean Power Plan — which would be vetoed by Obama in the unlikely event it passed the Senate — barely seems to register for international negotiators in Paris. “If [I] think about all of the many meetings I’ve had, U.S. politics is by and large not coming up,” Stern said.

Coequyt put it even more bluntly: “They’re not having an impact. They’re being ignored.” 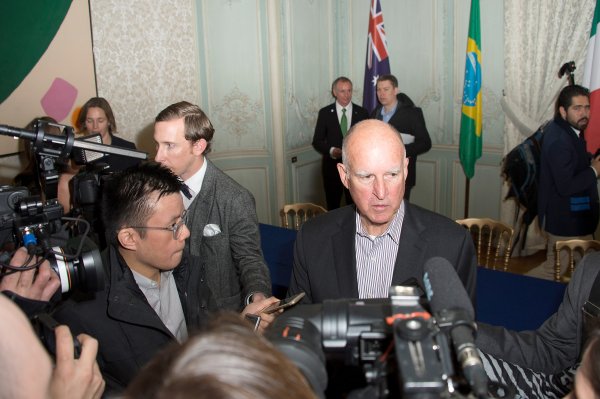 How Cities and States Took the Spotlight in Paris Climate Talks
Next Up: Editor's Pick