House Speaker Paul Ryan on Tuesday condemned Republican presidential candidate Donald Trump’s call for a ban on Muslim immigrants to America “until our country’s representatives can figure out what is going on.”

Ryan, who has been Speaker of the House for less than six weeks, had previously eschewed weighing in on presidential politics. He did so Tuesday after an announcement late Monday that Trump would no longer be participating in a Republican National Committee fundraiser later this week.

“This is not conservatism,” Ryan said in the RNC lobby on Capitol Hill. “What was proposed yesterday is not what this party stands for and more importantly it’s not what this country stands for. Not only are there many Muslims serving in our armed forces, dying for this country, there are Muslims serving right here in the House working every day to uphold and defend the constitution. Some of our best and biggest allies in this struggle and fight against radical Islamic terror are Muslims, the vast vast vast majority of whom are peaceful, who believe in pluralism and freedom, democracy and individual rights.”

Trumps comments came in response to a husband and wife rampage at a holiday party in San Bernardino, California on Friday that left 14 dead and more than 20 injured. The Federal Bureau of Investigation believes the couple was radicalized by al Qaeda. While Syed Rizwan Farook was born American of Pakistani descent, his wife, Tashfeen Malik, entered the United States on a fiancée visa.

Ryan did not mention Trump by name, and he pledged to support the Republican nominee, whomever that may be. “I’m going to stand up for what I believe in,” Ryan said. “I’m not concerned about lasting damage to the party; I’m concerned about standing up for our country’s principles. These are first principles and our party is dedicated to first principles and that’s why it’s incumbent on leaders of our party like myself to stand up and defend what conservatism is and what the Republican Party stands for.”

Ryan had a 41% approval rating and a 35% disapproval rating in late November, according to a Public Policy Poll, a better net favorability rating than any of the GOP presidential hopefuls. While he leads in primary polls, Trump has a 56.5% average unfavorable rating and a 36.5% average favorable rating, according to a Huffington Post compilation of surveys. 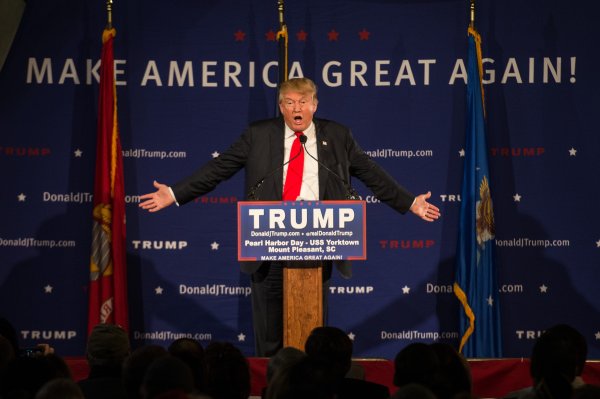 Exclusive: Donald Trump Says He Might Have Supported Japanese Internment
Next Up: Editor's Pick