Republican presidential candidate Sen. Ted Cruz joined Texas Gov. Greg Abbott in calling for new legislation that would establish a nationwide “moratorium” on the resettlement of any new Syrian refugees and give governors the explicit right to “opt out” of receiving new refugees in their state, the lawmakers said at a press conference Tuesday.

The announcement comes less than a week after Texas announced it would sue the federal government to block the arrival of all new Syrian refugees to the state, and just days after Attorney General Ken Paxton backed down on part of that lawsuit.

On Friday, Paxton said that he had dropped the lawsuit’s demand for an immediate “restraining order” on any new immigrants, a decision that paved the way for the arrival of 21 new Syrian refugees — including a dozen children between the ages of two and 15 — in Houston and Dallas this week.

Abbott, who had championed the original lawsuit, distanced himself from what he called “the attorney general’s decision” to drop the restraining order, and redoubled his commitment to fighting the resettlement of any new Syrian refugees in his state on security grounds.

Abbott said his office had reached out to Cruz’s office on Friday, urging the senator to propose new federal laws providing explicit power to states on refugee issues.

“Sen. Cruz put together a bill to empower state governors to address the refugee challenges that the states were having,” Abbott said. “Both the federal government and the refugee relocation organizations are not following the laws that have already been passed by Congress.”

Cruz proposed three new pieces of legislation on Tuesday. One would establish a nationwide”moratorium on all refugees coming from countries where ISIS or al-Qaeda control a substantial amount of territory,” another would give governors the explicit legal authority to “opt out of” receiving new refugees, and the last, which reintroduces an older bill, would strip Americans of their citizenship if they went abroad to fight with a terrorist organization.

Both Cruz and Abbott repeatedly refused to strongly criticize Donald Trump, who called yesterday for a ban on any new Muslim immigrants to the U.S. Cruz said that while he disagreed with Trump’s proposal, he respected and applauded Trump’s position on immigration. 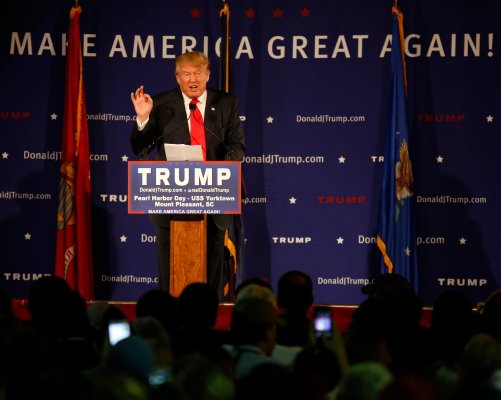 Donald Trump's Muslim Ban Rallies Religious Leaders Against Him
Next Up: Editor's Pick