San Bernardino Congressman: Suspects on No-Fly List Should Be Banned From Guns

Pete Aguilar is the U.S. Representative for San Bernardino, Calif.

On Dec. 2, I voted to allow debate on bipartisan legislation that would prevent suspected terrorists on the no-fly list from buying firearms. Moments after House Republicans blocked the legislation from being debated by the House of Representatives, I received text messages from my staff and friends at home saying that there was an active shooter in San Bernardino, Calif. The day after the horrific events at the Inland Regional Center, House Republicans blocked the measure again.

As I rushed back to my office from the House floor, my mind raced back and forth about what was going on—who can commit such a heinous crime, how can this happen in our community, and why would someone seek to kill so many innocent people? I thought about the people affected and what their families were going through. My mind went to my brother, sister-in-law, uncle and friends who are all San Bernardino County employees working in different facilities. I knew I needed to get home as quickly as possible. After taking the first plane I could out of Washington, D.C., I landed in Los Angeles and drove to our law enforcement’s command center to be briefed by investigators.

In the days that followed, we learned the names and stories of the 14 innocent lives that were viciously ended as they gathered for a holiday party. Since that terrible day, in the face of tragedy and despair, I’ve witnessed the incomparable ability of this community to rise up and stand together. During these dark times, I’ve attended vigils, community gatherings and memorial services and heard the same message from priests, pastors, rabbis and imams: we stand as one, and unity will help our community overcome our sorrow, fear and confusion.

As our community mourns, we remain united and stronger than ever. I echo President Barack Obama’s message of supporting each other as we rebuild in the aftermath of the devastating attack and condemning the actions of the attackers and their destructive ideology. The heroic actions of our law enforcement officers, paramedics and firefighters who risked their lives to end the violence, and the doctors and nurses who continue to tend to the wounded deserve continued recognition.

Now more than ever, we need to come together across boundaries of religion, race and any other differences that our enemies would like to use to divide us. San Bernardino is a community rich with diversity and history—this is something to embrace, not reject.

We need to do more to combat ISIS to eliminate threats abroad and at home. As we continue to take the fight to ISIS, it is imperative that we explore every option available to the United States and our allies. This includes additional special operations forces and possible no-fly zones. Given the role technology and social media plays in our fight against ISIS, we need to work with companies to do a better job of tracking and reporting these posts so law enforcement and intelligence agencies can follow up appropriately. In addition to these steps, we must confront the epidemic of gun violence at home. It’s necessary for the future of our country to have meaningful conversations and action to prevent future terrorist attacks like this, and that includes reasonable changes to our nation’s gun laws.

Gun violence has been a consistent problem in San Bernardino, a city that has seen hundreds of gun-related crimes this year alone. And now, in the wake of this tragedy, we must lead and tell the nation that guns are not more valuable than lives. The epidemic of gun violence is unique to our nation among developed countries—it just doesn’t happen in other places like it does here. Americans are about 20 times more likely to be murdered with a gun than in any other developed country.

In his address to the nation, President Obama outlined changes, like banning terror suspects on the no-fly list from buying guns and making it harder to acquire the assault weapons used to kill with lethal efficiency. Under federal law, domestic abusers, convicted felons and individuals with threatening mental illness can purchase firearms without background checks. This is unacceptable. While no single reform could have stopped the tragedy that unfolded in San Bernardino, that is not an excuse to ignore commonsense measures that make our communities safer. So far, the only action Congress has taken this year in response to gun violence has been holding moments of silence. With respect to my colleagues, silence won’t help us stop this—only meaningful action will do that. I remain committed to changing our laws to protect my community in San Bernardino and communities across the country from murderers and terrorists driven to kill.

As a Congressman and as a father, I believe that we can be better and do better to respond to the domestic and international threats our nation faces. As our community moves forward, we will show the country and world the resiliency of San Bernardino. We will remain unified, undeterred and unafraid. 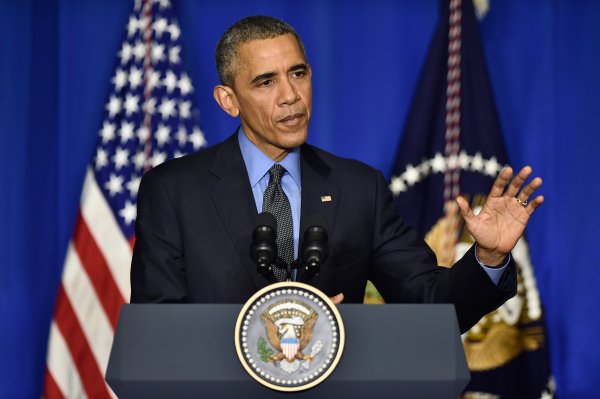 It's Too Late for Obama to Do Anything About Guns
Next Up: Editor's Pick