Hillary Clinton rolled out a plan to boost manufacturing in the United States and assist recovering post-industrial communities on Tuesday, part of a package of tax credits and federal research funding.

The Democratic presidential candidate’s plan involves a tax credit for areas that have lost manufacturing jobs, as well as expanding grants and access to capital for smaller manufacturers and startups.

“My plan will help spur reinvestment in communities that have lost jobs because of factory closures,” Clinton said. “By strengthening our manufacturing sector for the future, we can help create the next generation of good-paying jobs and put more people back to work across the country.”

She would also strengthen “Buy American” regulations, which require domestic sourcing of construction and other materials. All U.S. highway work, for example, must be completed with American-made steel and concrete.

Clinton announced a $275 billion federal infrastructure investment plan last week, and has called for significant tax credits for middle class families. She has pledged not to raise taxes on families making under $250,000 a year.

Clinton would double funding for the National Network for Manufacturing Innovation program, a public-private project that provides federal funding to mid-sized American manufacturers.

“We cannot afford to lose our capacity to make products in America,” Clinton’s campaign said in a fact sheet. 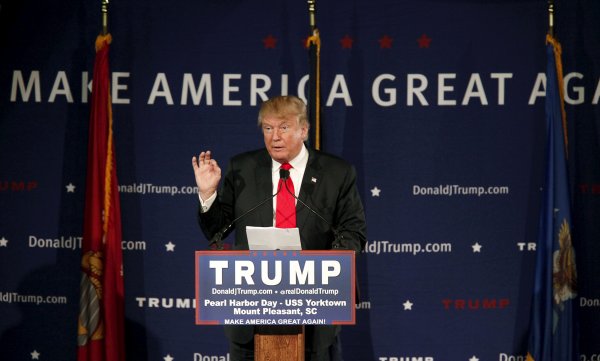 Trump Keeps Citing Polls to Ban Muslims But Here's What the Polls Really Say
Next Up: Editor's Pick