If you want to be the best, you have to learn from the best.

Business Insider asked several successful people about the smartest thing they ever did with their money.

If you want to start building wealth, take notes on what they had to say:

I built up an emergency fund

“I am forever grateful for having built up my emergency savings during my first job out of college, which allowed me to start LearnVest. Without that extra cash set aside, I wouldn’t have had the ability to take that crazy leap (in the heart of the recession) and help make financial advice accessible for Americans across the country.”

I paid myself first

“In a nutshell: Set aside a portion of my income to start to build my critical mass and committed to paying myself first.

“Explained further: One of the best pieces of advice that I received came from Ken Blanchard. I first met Ken when I was 24. At that time I was writing my very first book. It went on to land a spot on the New York Times Best Seller list, and I was gaining momentum and building my business.

“Like most people, I had already heard of George S. Clason’s 1926 classic, The Richest Man In Babylon the day that Ken pulled me aside for a talking-to. I was aware of a central concept in the book, the simple idea of paying yourself first — that is, taking 10% of your income and setting it aside to grow and protect you in the future. But Ken connected with me, and imparted a message at this critical time that I was coming into myself as a young businessman — he taught me something that many business owners don’t realize.

Tony, any amount of money that you feed your business, it will eat. So in writing a book, you are doing something here that is outside of the business. You are doing something that is going to support the company hopefully by bringing in new fans of your work, who then maybe engage with your brand, and do business with your company.

Since the company is getting that benefit, make sure you take the profits of your book and set them aside, and never allow them into your company’s account. This is the most important career advice given to me by another man and I want to pass it on to you. Remember Tony: A business is always hungry.

“Decades have gone by since Ken Blanchard spoke those words to me. I now have over 20 companies and I’m actively involved in running a dozen of them. Throughout the years, those words never left me. In fact, they became the basis of financial independence as I know it.”

I invested in real estate.

“The smartest thing I ever did was purchasing real estate in New York City in 2004 and holding onto the apartment until 2014. The home price had appreciated close to 70%. I had a buyer in less than 24 hours on the market.”

“In the Fall of 1993 I took my hard earned money from an internship as a software engineer at Hewlett-Packard and bought an Apple Quadra 800. Although this computer cost me a significant portion of my entire summer’s earnings, it was one of the smartest things I have done with my money because of the opportunities it led me to in my career.

“In many ways, that purchase represented the beginning of my financial independence. I bought the computer because I had just declared my major in Computer Science. This decision led me to the best job I had ever had. I then decided to personally reinvest the earnings into equipment that I believed would further my development. More importantly, rather than placing a further burden on my parents, it was my first significant independent purchase.

“It’s hard to quantify the value of investing in your own skills, and then having them rewarded with financial independence, but looking back now over 20 years in the software industry, it’s hard not to be nostalgic for that Quadra 800.”

I invested in ideas.

“The smartest thing I’ve ever done with my money is invest in, and incubate, talent and ideas with a heart and a soul. My passion and life’s work has always been about innovating — reimagining lifestyle and entertainment experiences and making them community-centric.

“I’ve never bought a stock in my life and I’ve never been interested in investing in things I can’t control. For me, it all comes down to predicting the zeitgeist and investing in people and ideas that have the courage to be daring and transformational.”

I made my money work for me.

“The rich taught me how to use my wealth as a lever to generate more wealth. It’s been an unfair advantage I’ve had for many years.

“The most recent example of leveraging wealth would be the purchase of the Bona Allen Mansion near Atlanta. This purchase and renovation project has attracted attention to our business from all over the world. We’ve received emails of congratulations, offers from larger companies to purchase the property, and ideas for restoration from as far away as China, Brazil, and Australia. The Mansion is a six acre compound that not only serves as our new headquarters, but as a world-class marketing tool that puts us on par with our larger competitors. That’s what leveraging money is all about: You invest one dollar and get ten in return.”

I started a business.

“The smartest thing I ever did was take $5,000 to start my business, FinishRich Media. I started it on a coffee table in my kitchen, with nothing but a dream and an idea to teach a million women about money with a program I had created called Smart Women Finish Rich.

“I hired an attorney who created the company structure legally, opened the accounts properly, and built the business from day one to be a ‘real business.’ Within a few years we had sold Smart Women Finish Rich to Random House, launched our Smart Women Finish Rich Seminars nationally, and produced a PBS special — and, over the next decade we taught over a million women the steps to living and finishing rich. Today, 12 books later, the FinishRich Brand has seven million books in print in over 19 languages and 50 countries.”

I lived below my means.

“I never spent to the level I was earning. I always stashed away bonuses and part of my checks into investment accounts and savings accounts. The few instances where I did go ‘underwater’ were the times when I was investing in business, real estate, or other similar opportune investments. I could afford to participate in these types of ventures because I always had savings to fall back on.”

I invested in myself.

“The smartest thing I ever did was invest in myself, because my personal brand will always be around. I put money back into my design and my content — for my personal development and growth, and for my team.” 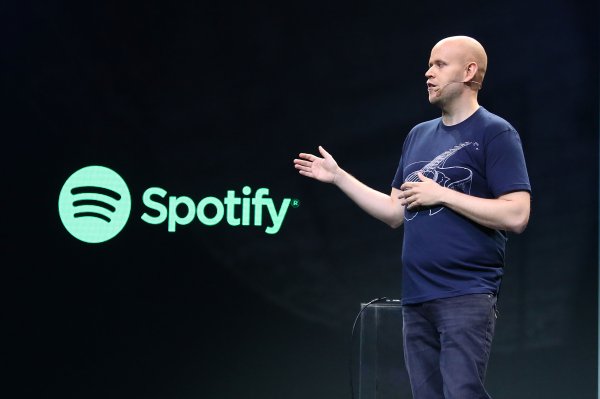 Spotify Is Reportedly Considering a Massive Change
Next Up: Editor's Pick