In an exclusive interview with TIME Washington Bureau Chief Michael Scherer recently, Donald Trump said he may have supported Japanese internment during World War II. The quote takes on new significance after Trump called Monday for banning the entrance of all Muslims into the United States. The move by many of Trump’s rivals to condemn him was swift, with Jeb Bush, Lindsey Graham, John Kasich, and Chris Christie leading the charge. Rand Paul and Ted Cruz, on the other hand, declined to criticize Trump’s proposal. The pair are pushing congressional legislation to temporarily curtail Muslims from entering the country as refugees, and in the case of Paul, institute a visa ban for most predominately-Muslim countries. Trump had been scheduled to attend a fundraiser for the Republican National Committee on Wednesday in New York City, but he will no longer be in attendance, a spokesperson told TIME. Trump’s comments are already a boon for fundraising, with Democrats quickly blasting their list for dollars, and even some Republicans joining in for a piece of the pie.

The pro-Bush super PAC Right to Rise is going negative on Trump, Rubio, and Cruz on national security in a new ad, calling the front-runner “impulsive and reckless” and criticizing the pair of lawmakers for their Senate records. Airing nationally and in the early states, it represents the first major negative spot from his super PAC, which is sitting on tens of millions of dollars. Bush is betting that these spots will help him regain his footing going into the early states. Meanwhile, the candidate is going ahead with his policy push. On Tuesday, Bush is announcing a task force on federalism, to shift power from the federal government to the states. His plan also calls for allowing states to “enhance” their enforcement of federal immigration law.

Ben Carson is visiting Africa at the end of the year to bolster his foreign policy credentials and highlight elements of his personal story. The week-long trip will see him learn about the threat of Boko Haram in Nigeria and visit a pair of formerly-conjoined twins he separated nearly 18 years ago. Ted Cruz will appear with Texas Gov. Greg Abbott Tuesday to highlight his legislation banning Syrian refugees, as their state is suing the federal government to keep them from being resettled in Texas.

Sorry, Bernie! Hillary Clinton caught up with President Barack Obama Monday for a 90 minute lunch, the White House said. The semi-regular visits, combined with recent Cabinet endorsements and the large percentage of Obama alumni staffing Clinton leave little doubt in whom the president hopes will be his party’s next standard-bearer.

Syrian Refugees To Arrive in Texas Despite Governor’s Lawsuit

After Months of Lying in Wait and Watching Rivals, Ted Cruz Sees Payoff in Polls

“I wrote something today that I think is very very salient, very important, and probably not politically correct, but I don’t care,” —Donald Trump on his plan to ban Muslims from entering the U.S. Monday night at an event in South Carolina.

“This is just more of the outrageous divisiveness that characterizes his every breath and another reason why he is entirely unsuited to lead the United States.” —Ohio Gov. John Kasich responding to Trump’s comments.

Trump Will No Longer Attend a Scheduled RNC Fundraiser [TIME]

U.S. Will Add a Third Level to Warnings of Terrorism [New York Times] 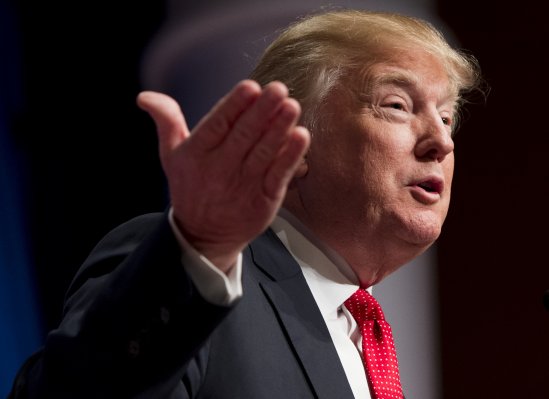 Here's What Legal Experts Think of Donald Trump's Plan to Ban Muslims
Next Up: Editor's Pick