How Cities and States Took the Spotlight in Paris Climate Talks

California Governor Jerry Brown speaks to the press after the signing of the memorandum on subnational global climate leadership on Dec. 6, 2015 in Paris.
Aurelien Meunier—Getty Images
By Justin Worland / Paris

Jerry Brown may not be a world leader, but he’s the talk of the town in Paris at what organizers hope will be the most significant international gathering ever on climate change.

The governor of California is here to spend a week touting his efforts on the issue at the state level, where he has overseen the launch of a cap-and-trade program and instituted targets to reduce carbon emissions by 80% from 1990 levels by 2050. Those are programs and goals President Obama could not dream of implementing on the federal level.

But Brown isn’t just in Paris to show off his state’s accomplishments. The governor, who notes that he traveled to Paris at the invitation of U.N. climate chief Christiana Figueres, has used his time here to deepen the partnerships he’s formed with states and provinces around the world, in an effort to bypass the cautious U.S. government and forge direct agreements with foreign partners more motivated to fight climate change.

“We don’t have to wait for the federal government to say jump. We’re already moving,” Brown said in an interview with TIME. “We’re working with China and Germany and Mexico and provinces all over the place. We’re a global force.”

Brown, a three-time Democratic presidential candidate, may be one of the best-known U.S. governors, but he’s far from the only representative of states and local governments here in Paris. Walk near the conference center and you may spot former New York Mayor Michael Bloomberg, Washington Governor Jay Inslee, Rio de Janeiro Mayor Eduardo Paes, Quebec Premier Philippe Couillard or one of dozens more governors and mayors in attendance from around the world.

Many climate policy experts paint states, cities and local governments as the potential savior of efforts to reduce greenhouse gas emissions when national efforts fail to materialize. Mayors and governors gathered here in Paris on the sidelines of formal negotiations say they’re up for the fight. “The task of reducing our carbon footprint is so great and so global that every entity that can needs to pitch in,” said Brown. “Modernity has two major elements: individualism and oil. And those two we have to transform.”

Countries from around the world made commitments to address their greenhouse gas emissions in the build-up to the Paris conference, formally known at the 21st session of the Conference of the Parties (COP21). These commitments would have been unthinkable even a decade ago, but they still don’t go far enough to solve the climate crisis. Whatever agreement emerges this week is unlikely to keep global temperatures from rising more than 2°C (3.6°F), a threshold climate scientists say will trigger the most catastrophic effects of global warming. Commitments from countries around the world would still allow temperatures to rise by more than 3°C (5.4 F).

Cities, states and other subnational governments could come in to make up the difference, policy experts say. The activities of cities alone account for more than 70% of energy-related carbon dioxide emissions, a number which is expected to grow as urbanization continues across the globe.

What sub-national leaders lack in prestige on the international scene, they’ve made up for in action. The Compact of States and Regions, a consortium of sub-national governments from six continents, announced commitments on Dec. 6 to cut greenhouse gas emissions by a cumulative 12.4 gigatons by 2030 when compared to business as usual projections. (For perspective, the U.S. emits between 5 and 6 gigatons annually). In another announcement, cities across the U.S. and China jointly announced plans in September to cut their emissions by 1.2 gigatons of carbon dioxide annually.

California and Quebec have also partnered to launch a cap-and-trade scheme that allows emitters to trade the right to emit carbon dioxide, which gives companies an incentive to stop polluting and eventually drives down greenhouse gas emissions. A number of Chinese regions have also been experimenting with a similar program, which led to the creation of a national program.

“Mayors are incredibly fired up and they’re proud of what they accomplished,” said John Coequyt, the Sierra Club’s director of federal and international climate campaigns. “If cities take this seriously, they can be huge drivers of progress without any real support from national governments.”

But, for all the work they’re doing, sub-national governments face a number of difficulties in their efforts to stem the use of fossil fuels. Efforts tend to occur in a more piecemeal fashion with most efforts in most cities barely registering on a global scale. Observers may also struggle to follow up on commitments made in so many different cities and governments. A number of different alliances and consortiums aim to combat those problems with varying levels of success, but in the end local leaders are going to keep doing what they’re doing and hope that it pushes their national governments to do the same. 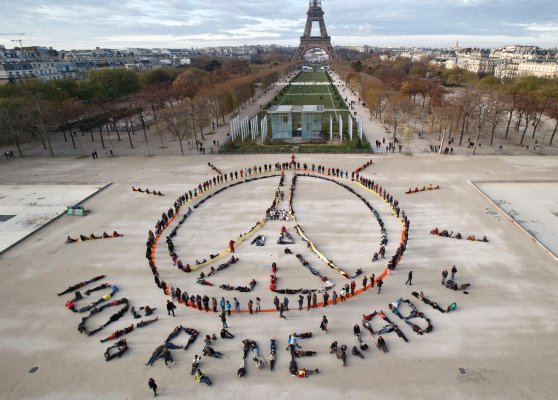 It's All About the Money at Paris Climate Conference
Next Up: Editor's Pick