Ronda Rousey Opens Up About Her Stunning Loss to Holly Holm

Ronda Rousey may be down — but she’s far from out.

After a crushing defeat by Holly Holm left Rousey unconscious, hospitalized and “really f—ing sad,” the Ultimate Fighting Championship superstar was forced to accept the fact that she won’t retire undefeated — that she’s not, as people were starting to believe, invincible.

The stitches in her lip still dissolving, and a few of her teeth still unstable from Holm’s fight-ending kick to the face, Rousey admits to ESPN The Magazine in its “Ideas of the Year” issue, on newsstands Friday: “It might be three to six months before I can eat an apple, let alone take an impact.”

But, in a new interview at her “smallish boho town house” in Venice, California, less than two weeks after the fight that brought a shocking close to her winning streak, Rousey remains optimistic. “Maybe I can’t do it all before my prime, before my body is done,” she says. “But f— it, maybe I can.” 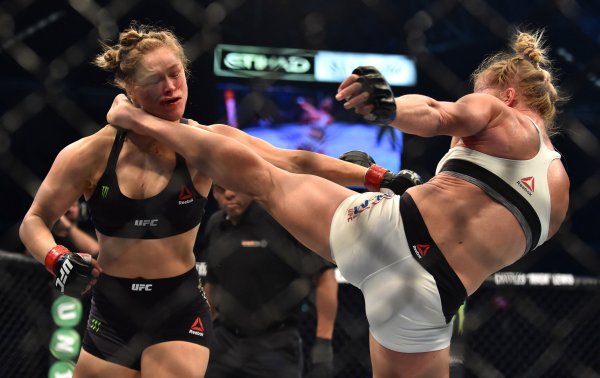 Ronda Rousey Will Get a Rematch With Holly Holm
EDIT POST