The Supreme Court Could Send America Back a Century

J. Douglas Smith is the author of On Democracy’s Doorstep.

The Supreme Court will hear arguments Tuesday in Evenwel v. Abbott, a case from Texas that threatens to undermine one of the great achievements of 20th-century American democracy: the principle of “one person, one vote.”

Currently states count all inhabitants captured by the U.S. Census when they draw districts to determine political representation. Challengers argue that states should count only voters instead. This would disqualify persons under the age of 18, documented immigrants who are not yet citizens, and former felons who have lost the right to vote, among others. It would also mean that an astonishing number of Americans of color—as many as 55% of Latinos, 45% of Asian Americans, and 30% of African Americans—would no longer be counted.

Redefining “one person, one vote” to mean “one voter, one vote” would be both tragic and, given the history of the issue prior to the 1960s, deeply ironic. The petitioners in Evenwel live in rural districts where there are relatively few non-citizens and others unable to vote. They claim that the weight of their vote has been diluted. Yet it was voters in these very same rural districts who were vastly overrepresented prior to the “one person, one vote” decisions of the 1960s.

By the 1960s, American democracy had become, in effect, a system of minority rule. Because most states based representation in at least one chamber of the legislature on factors other than population, district boundaries were readily drawn to give some citizens a far greater voice than others. And since state lawmakers typically control districting for the U.S. House of Representatives, malapportionment guaranteed that residents of more-populous districts generally lacked adequate representation at the federal level as well.

Most states have long mandated the reapportionment of at least one branch of the legislature at regular intervals, typically after each decennial census. But some lawmakers allowed district boundaries to remain fixed for decades. Only 18 of 48 states redrew boundaries in the wake of the 1940 census. Legislators in Oregon ignored their obligations for a half-century after 1907. Illinois established districts in 1910 that remained in place until 1955, while Pennsylvania and Indiana reapportioned in the early 1920s but not again for 30 and 40 years, respectively. Despite state constitutional requirements to reapportion every 10 years, Alabama and Tennessee set districts in 1901 that did not change for more than 60 years.

Malapportionment reflected more than a simple divide between rural and urban interests. The leaders of many urban-based business and trade groups considered representatives of remote and lightly populated districts to be more reliable allies than their urban counterparts, and thus actively defended malapportionment in order to promote a pro-business, anti-labor agenda of low taxes, limited government spending and minimal regulation.

Throughout the U.S., malapportionment was entangled with fundamental struggles for civil and voting rights, as well as related contests between labor and business. In the industrial Northeast and Midwest, and especially in populous states such as Illinois, Michigan, Pennsylvania and New York, whose vast cities teemed with blue-collar workers and ethnic minorities, malapportionment circumscribed the political power of labor and civil-rights advocates. In the American South, where labor unions were weak, malapportionment served as a cornerstone of white supremacy, ensuring the overrepresentation of the most ardent segregationists and thus further delaying the realization of civil and voting rights for African Americans.

By 1960 malapportionment had produced staggering inequality in virtually every state in the union. A town of 38 residents in Vermont elected the same number of representatives—one—as Burlington, population 33,000. In New Jersey, the state’s 21 senators represented as few as 48,555 people or as many as 923,545. In Georgia, house districts contained between 1,876 and 185,422 constituents. Senate districts in Idaho ranged from 915 to 93,460, and in Arizona from 3,868 to 331,755. In California, more than six million residents of Los Angeles County, nearly 40% of the state’s total population, elected just one state senator, as did the 14,294 inhabitants of three sparsely-populated counties.

Only five states—Massachusetts, New Hampshire, Oregon, West Virginia, and Wisconsin—apportioned districts so that majorities in both chambers of the legislature represented at least 40% of the population. Florida held the distinction as the only state in which legislative majorities in both branches of the legislature could theoretically represent less than 20% of the residents.

In response to such glaring inequities, the Supreme Court, led by Chief Justice Earl Warren, finally intervened. In a series of decisions handed down between 1962 and 1964, the Court concluded that each state’s districts for the U.S. House of Representatives must contain, as nearly as possible, the same number of people, and that both chambers in a state’s bicameral legislature must be apportioned according to the principle of “one person, one vote.” By the end of the decade, the Court had determined that apportionments for all elective municipal and county offices—including city councils, boards of supervisors, and school boards, among others—must adhere to the same standard.

For more than 50 years, the principle of “one person, one vote” has been settled law. But in requiring that all state legislative apportionments be based on population, the Warren Court did not specify explicitly whether “person” meant people or voters, and thus we have the issue now before the Court. At the time, the distinction did not appear crucial to the justices. While states, therefore, have technically had flexibility until now in defining “person” in the reapportionment of state legislative bodies, the presumption has been on people. No state currently counts voters, and only five did so prior to the reapportionment decisions of the 1960s. A declaration from the Court that the states must count voters rather than people would be truly revolutionary.

Warren repeatedly cited the reapportionment rulings as the most important of his tenure on the Court. A decision in favor of the challengers has the potential to threaten many of the gains that he championed and could lead us back to a time when a minority of American citizens enjoyed disproportionate political power. 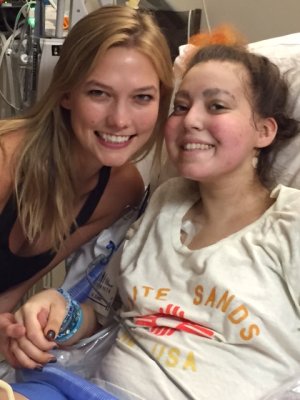 Karlie Kloss, Abby Shapiro and the Power of Kindness
Next Up: Editor's Pick