Why Jelly Doughnuts Are Eaten During Hanukkah

There’s an Israeli folktale that goes this way: after Adam and Eve were expelled from the Garden of Eden, God tried to cheer up by giving them jelly doughnuts. Pretty much all scholars agree that the tale has zero basis in the scripture, but the idea that doughnuts bring joy is a standard one across cultures. Germans eat Berliners on New Year’s Eve for good luck, the Pennsylvania Dutch mark Fat Tuesday with fried fassnachts and the peoples of Latin America and Spain enjoy buñuelos on Christmas

The Israeli version is the sufganiyah—the singular of sufganiyot���and it’s not only the Lord’s consolation prize, but also a staple of annual Hanukkah celebrations. It’s said that the fried treats are a good fit for a holiday focused on oil, commemorating the miracle of one night of oil lasting for eight. The most stereotypical sufganiyot, after all, are fried balls of yeast dough filled with strawberry jelly and dusted heavily with powdered sugar.

But jelly doughnuts weren’t a part of a typical diet at the time the Hanukkah story would have taken place, and the miraculous oil isn’t the whole story behind why they’re eaten on the holiday.

The word sufganiyot can be traced back to the Greek word sufan, meaning “spongy” or “fried,” as can the Arabic word for a smaller, deep-fried doughnut named sfenj. This could perhaps be where these treats got their name; similar fried balls of dough have been eaten to commemorate Hanukkah for centuries by Jews in North Africa.

But these Moroccan and Algerian treats didn’t have the modern sufganiyot’s characteristic jelly filling, which is where migrants from Central Europe came in. The first fried pastries in European history typically contained savory fillings, like meat or mushrooms. But the establishment of colonies in the Caribbean in the 16th century brought cheap, slave-produced sugar to the continent and led to a renaissance in fruit preserves and from that a renaissance in sweet stuffed pastries. The first known recipe for a jelly doughnut, according to historian Gil Marks, can be found in the 1532 German cookbook Kuchenmeisterei, which translates to “Mastery of the Kitchen” and is remembered by history for being one of the first cookbooks run off of Gutenberg’s famed printing press. The treat was made by packing jam between two round slices of bread and deep-frying the whole thing in lard.

From its Germanic origins, the dessert quickly conquered most of Europe. It became krapfen to the Austrians, the famous Berliners to the Germans and paczki to the Polish. Substituting schmaltz or goose fat for the decidedly un-Kosher lard in their fryers, the Jewish peoples of these regions also enjoyed the dessert, particularly Polish Jews, who called them ponchiks and began eating them regularly on Hanukkah. When these groups migrated to Israel in the early twentieth century, fleeing the harsh anti-Semitism of Europe, they brought their delicious jelly-filled doughnuts with them, where they mingled with the North African fried-dough tradition.

But it would take more than just the mingling of Jewish cultures to make the sufganiyot the powerful symbol of Israeli Hannukah it is today. Credit must be given to the Israeli Histradut. Founded in 1920 in what was then British-mandated Palestine, the national labor group’s aim was to organize the economic activities of the Jewish workers in the region. Founded on Russian socialist principles, full employment was amongst its aims, as was the integration of the new Jewish immigrants making their ways to the country’s shores.

The latke, the classic fried potato pancake that was already associated with Hanukkah celebrations, is a dish that can easily be made at home. A perfectly filled and fried sufganiyot is much more difficult. Even some of the most talented at-home cooks will agree that the treat tastes better when left up to the professionals. Which is exactly what the Histadrut wanted: a Hanukkah treat that involved professionals. As many important Jewish holidays are concentrated in autumn, the end of that season often brought a lull in work in Jewish quarters. By pushing the sufganiyot as a symbol of the Festival of Lights, as opposed to the DIY-friendly latke, the Histradut could encourage the creation of more jobs for Jewish workers.

By all accounts, the Histadrut’s efforts to promote the jelly doughnut worked. In modern Israel, over 18 million sufganiyot are consumed in the weeks around the holiday, which averages out to over three doughnuts per citizen. More people enjoy the fried treat than fast on Yom Kippur, the holiest day in the Jewish calendar, and the Israeli Defense Forces purchase more than 50,000 of the doughnuts each day of the eight-day holiday to boost the morale of its troops.

Sufganiyot can now be found throughout the United States as well during Hanukkah, produced by Jewish and non-Jewish bakeries alike. After all, as people all over the world have been discovering for centuries, no one can say no to a truly delicious jelly doughnut. 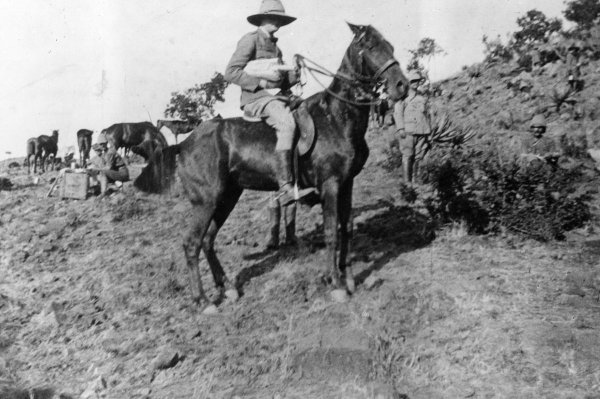 How Being a War Reporter Shaped Winston Churchill's Life
Next Up: Editor's Pick