OPEC’s decision at its semi-annual meeting in Vienna on Friday not to cut production but to legitimize its overproduction shows that the group is determined at any cost to recover the market share it lost to producers outside the cartel, particularly those drilling for oil in the United States. Which means that the world can probably expect oil prices to remain low for some time.

Traditionally, OPEC members have produced about 40 percent of the world’s crude oil, but 18 months ago prodigious U.S. production began to eat into its market share. It also created an oil glut that caused prices to decline precipitously from a high of more than $110 per barrel beginning in June 2014.

The group had the option of reducing its production ceiling, which had been at 30 million barrels per day for several years, to help stabilize prices. Such a move would have been led by Saudi Arabia, OPEC’s leading producer, which for years had been the “swing” producer, adjusting production up or down to keep prices at levels with which the group was comfortable.

Instead, Saudi Oil Minister Ali al-Naimi decided on a strategy to maintain OPEC’s production level, a move that helped accelerate the drop in oil prices, which have now plunged to just over $40 per barrel. There were calls from several members of the group, including Algeria, Ecuador and Venezuela, for OPEC to reduce output, but at Friday’s meeting the cartel agreed to maintain its production ceiling.

Al-Naimi said his goal in refusing to cut production was to drive the U.S. drillers out of business. They had been relying increasingly on expensive hydraulic fracturing, or fracking, which isn’t profitable unless the average global price of oil is about $60 per barrel. So far that strategy has worked, as rig counts in the United States have fallen substantially.

But al-Naimi’s strategy has also had unwanted side-effects on OPEC members themselves. The Saudi minister evidently believed that oil-producing countries, particularly rich Gulf States, could weather a period of lower revenues while frackers licked their wounds. After all, at the time Saudi Arabia had monetary reserves of about three-quarters of a trillion dollars.

But less affluent OPEC countries such as Venezuela were hit with serious losses. And eventually even Saudi Arabia began to feel financial pressure and was forced to revise the projected budget revenues. Even the stock markets of Gulf States were affected: On Oct. 30, the U.S. financial services company Standard & Poors cut its rating of the Saudi sovereign debt.

There had been some hope that Friday’s OPEC meeting would have a different outcome. Saudi Arabia had proposed that the group reduce output if other producers, OPEC members and non-members alike, agreed to do the same. “We cannot cut alone,” one official from the region said Wednesday. “Everyone has to contribute to that – Iran, Iraq, and the rest outside OPEC.”

Two oil producers, however, Iran and Russia, rejected the plan Thursday. Iran’s oil minister, Bijan Namdar Zanganeh, said in Vienna that setting production levels “is our right and anyone cannot limit us. … [W]e do not expect our colleagues in OPEC to put pressure on us. … It is not acceptable, it’s not fair.” Iran expects to resume robust oil production next year, once U.S. and European Union sanctions on its oil and financial industries are lifted as a result of a deal for Tehran to limit its nuclear program.

And in Moscow, Russian Oil Minister Alexander Novak said he didn’t see any reason for his country to reduce production because he didn’t expect OPEC itself to mean what it said about cutting output. Russia’s own output in November, for example, was nearly at a post-Soviet record, with output of crude oil and gas condensate averaging 10.779 million barrels a day, according to Energy Ministry figures.

Whatever anyone expected before the meeting, the only thing anyone can expect now is that the price of oil will remain low for the foreseeable future, as will the various degrees of pain it causes in oil-producing countries and among investors. 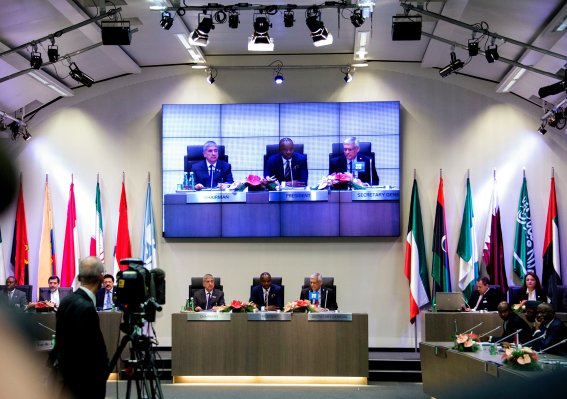 Can OPEC Strike a Deal on Cutting Production?
Next Up: Editor's Pick