Vermont Sen. Bernie Sanders announced on Monday an aggressive plan to combat climate change and cut carbon emissions by more than 80% by 2050.

The Democratic presidential candidate’s plan would impose a tax on carbon, end federal subsidies for fossil fuels and prohibit extraction on federal lands, three contentious proposals highly unpopular with most Republicans and some Democrats. Sanders would also create a clean energy federal workforce program of 10 million jobs to convert the economy to a 100% clean energy system, though he does not set a timetable for that part of his plan.

“The debate is over. The vast majority of the scientific community has spoken. Climate change is real,” said Sanders. “We will act boldly to move our energy system away from fossil fuels, toward energy efficiency and sustainable energy sources like wind, solar, and geothermal because we have a moral responsibility to leave our kids a planet that is healthy and habitable.”

Sanders’ plan also includes a map of the United States with the target clean energy breakdown listed for each state. States in the Midwest, like Kansas and Iowa, would rely heavily on wind energy, while states in the sunny West like Nevada would invest in industrial-scale solar plants and residential rooftop photovoltaic cells.

It is Sanders’ first extensive policy proposal for addressing climate change, a topic the Democratic presidential candidate talks about often on the campaign trail. The plan is written in the language of Sanders’ stump speech, with invectives against the fossil fuel industry and the “billionaire class.”

Democrats have set ambitious goals for reducing carbon pollution in the coming years. Former secretary of state Hillary Clinton’s plan calls for a 700% increase in solar capacity by the end of 2020 and renewable energy to power every home in the United States within ten years of Clinton taking office.

Sanders’ plan is more aggressive than Clinton’s climate agenda, but also more politically contentious. Some of the measures he calls for have been proposed but are unlikely to pass through Congress. Republicans have largely dismissed efforts to address climate change.

Bill McKibben, an influential environmental activist who is one of Sanders’ staunch supporters, praised the plan.

“Bernie’s vision of a transformed America is powerful, because it recognizes both the ecological need and the human priority,” environmentalist and co-founder of 350.org Bill McKibben said. “There’s good useful work that we need millions of Americans to do—and he’ll make sure it’s done by the people left out of our economic booms of the past.”

“The climate plan released by Senator Bernie Sanders today shows that he has broken free of the corporate and 1 percent money that has held back climate policy for far too long,” Greenpeace U.S. executive director Annie Leonard said.

Mark Ruffalo, the Hollywood star and Sanders supporter, also endorsed the plan. “Bernie continues to be the transformative candidate and the one most willing to bring everyone along,” Ruffalo said. “He is a man of the people and is exactly today who he has always been: the real deal.” 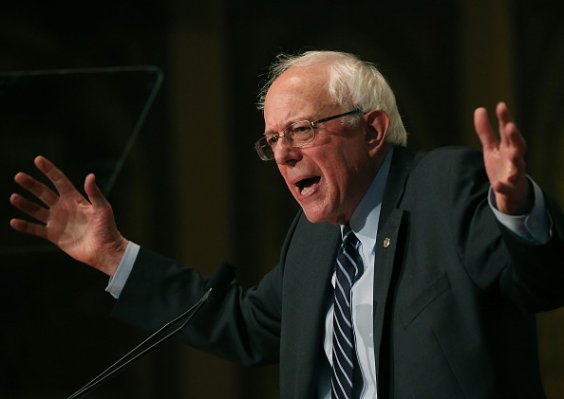