Why the Paris Climate Summit Is All About the Money

Environmentalist activists form a human chain representing the peace sign and the spelling out "100% renewable", on the side line of the COP21, United Nations Climate Change Conference near the Eiffel Tower in Paris on Dec. 6, 2015.
Michel Euler—AP
By Justin Worland / Paris

It’s all about the money in Paris this week where negotiators opened the second and final week of talks on climate change. Negotiators remain optimistic that they will achieve a landmark deal to reduce greenhouse gas emissions, but say tensions remain on a number of key issues including how to finance efforts to fight climate change in developing countries.

Negotiators hammered out a working draft during the first week of negotiations, but as with most high stakes negotiation many of the crucial details remain undecided. Disagreement over finance and how ambitious a deal remained resonant as cabinet-level ministers arrived in Paris to help with the final stages of negotiations.

“A lot of finance has been brought to the table over the last week,” said John Coequyt, the Sierra Club’s director of federal and international climate campaigns. “What hasn’t been established is the details within that.”

Discussions around finance at the climate talks in Paris, known formally as the 21st Conference of the Parties (COP), largely center around a 2009 commitment from developed countries to send $100 billion a year to the developing world annually to support initiatives to address climate change. A recent report from the Organization for Economic Co-operation and Development (OECD) showed that $62 billion, from a combination of public and private funding, flowed in that direction in 2014, a $10 billion jump from the previous year.

Developed countries have been announcing a series of commitments to help close that nearly $30 billion gap. The United States announced a $3 billion commitment earlier this year, Canada more than $2.5 billion and Japan $1.5 billion. Others have contributed billions more. When paired with private funding, that money goes a long way. “We have every expectation of strong and robust finance continuing from the U.S. and others to developing countries,” said U.S. Climate Envoy Todd Stern at a press conference.

New research published this week showing that carbon dioxide emissions actually declined in 2014 even as the global economy grew. That may buoy climate negotiations, in part because it demonstrates that it is possible reduce greenhouse gas emissions without automatically dinging economic growth.

But, even if the $100 billion figure is reached, questions remain over how it will be distributed. Negotiators from countries most vulnerable to the effects of climate change want to see a commitment to fund adaptation projects that will safeguard them from rising sea levels and the possibility of extreme weather events. Those efforts can be harder to fund because they don’t provide a clear avenue for getting financial returns like investments in renewable energy.

Disagreements also remain over how ambitious the agreement should be. For one, negotiators are discussing how countries will assess and improve upon their national commitments to address their greenhouse gas emissions. The U.S. has joined with many of the world’s most vulnerable countries to call for nations to “ratchet up” their commitments every five years beginning as soon as 2020. This system would encourage leaders to make stronger commitments as technology and development makes renewable energy cheaper. The ratcheting up system would also allow countries to respond to changing science about the urgency of climate change.

The ratcheting up mechanism has gained favor among developed countries, but many in the developing world fear the review system will force them to make commitments they cannot keep before assessing the effects of their first efforts at climate mitigation, according to John Coequyt, the Sierra Club’s director of federal and international climate campaigns. The U.S. on the other hand is in a position to lead the effort for five-year review periods because it has only made commitments to cut greenhouse emissions through 2025. “The developing countries aren’t nervous about the notion of coming back every five years,” said Coequyt. “They’re worried about getting caught in a negotiation where the very strong expectation is they have to continue to accelerate.”

The most vulnerable developing countries are also pushing for the climate agreement to have a more aggressive target. Countries have previously agreed to try to keep temperatures from rising by more than 2°C (3.6 F) by 2100, but a push from some of the most vulnerable countries to change the target to 1.5°C (2.7 F) has gained traction with vital endorsements from Germany and France. Even U.S. Climate Envoy Todd Stern showed support for the final agreement to “include reference” to that stronger target on Monday.

The 1.5°C (2.7 F) target, even if included in the final agreement, is unlikely to actually be met. Temperatures are expected to rise by more than 3°C (5.4 F) even if countries follow through on their current commitments to cut greenhouse gas emissions. Climate experts acknowledge that fact, but it doesn’t seem to be stopping them.

“You don’t get action without strong goals,” said Heather Coleman, climate change manager at Oxfam International, at a press conference. “That’s why so many organizations are pushing here for a long-term goal.” 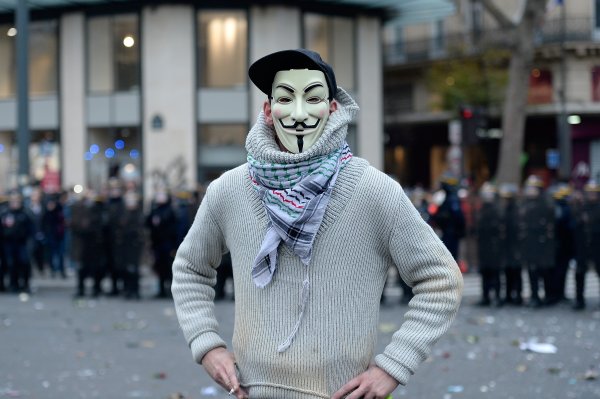 Anonymous Plans 'Trolling Day' Against ISIS
Next Up: Editor's Pick