Former Indonesian domestic helper Erwiana Sulistyaningsih, center, looks on as a supporter, right, speaks to the press in front of the District Court following the sentencing of her former employer Law Wan-tung in Hong Kong on Feb. 27, 2015
Anthony Wallace—AFP/Getty Images
By Joanna Plucinska

Thirty-three-year-old Indonesian domestic helper Elis Kurniasih was praying outside the Sunlight Employment Agency’s boarding house in Hong Kong on March 11. She was told to live there, apparently sleeping on a mat on the floor, after her new employer asked for a two-month delay to her contract’s start date. As she prayed, a 132-lb. concrete block, meant to hold up an air-conditioning unit, came loose, crumbling away from the building. Her back broke from the impact of the blocks’ fall, causing severe bleeding. She died a few days later. Reports of the boarding house’s poor living conditions started to circulate soon after.

Human-rights advocates in Hong Kong hoped these kinds of stories would become less frequent after the case of Erwiana Sulistyaningsih, another young Indonesian domestic helper whose plight garnered international attention two years ago this month, after she was found in the departure lounge at Hong Kong Airport, covered in burns and scars inflicted by her employer. While Erwiana’s boss, Law Wan-tung, was eventually sentenced to six years in jail in February 2015, the case showed how far abuses could go before they came to light.

At the time, the Hong Kong government promised to increase inspections and oversight to protect against horrific abuses and systematic negligence. Leung Chun-ying, Hong Kong’s top official, said the city would “absolutely not tolerate” any sort of violent actions towards domestic helpers. But despite the ongoing efforts of the so-called Domestic Workers’ Roundtable (a Hong Kong University initiative that brings together representatives of the Hong Kong government and the governments of the Philippines and Indonesia, which supply the vast majority of the city’s domestic helpers), and despite campaigning by NGOs, the existing legal framework still fails to protect Hong Kong’s domestic workers, critics say.

Paid a minimum wage of just under $545 a month, helpers are at once affordable to many middle-class Hong Kong families and sufficiently well remunerated for the work to be highly desirable to women from the Philippines and Indonesia, where average monthly earnings are well under $300 and $200 respectively. For many helpers, it is a chance to escape rural poverty, to put their children through college, buy a house and land, fund retirement, or save enough capital to start a small business back home.

Positions in Hong Kong are particularly sought after, because the women have all heard horror stories of abuse and maltreatment in the Middle East and reports of lower wages in other parts of Asia. “They all say Hong Kong is the best,” says Emily Lau, who participates in the Domestic Workers Roundtable meetings and is the chairwoman of the Democratic Party in Hong Kong.

But some women are not so lucky. Hong Kong’s labor laws guarantee food allowances, adequate living conditions, mandatory employer-funded health insurance and seven days of paid vacation a year for all domestic workers. Nonetheless, Leo Tang, of the Hong Kong Federation of Asian Domestic Workers Unions, says that he still encounters infractions like underfeeding, missed vacation days and poor sleeping conditions. Critics say much of the problem stems from a rule that requires a domestic helper to live in her employer’s home for the duration of her contract, making her vulnerable to emotional, physical or even sexual abuse.

The government has now set up legal channels, like free hotlines and police services, to address contract infractions, Hong Kong’s Secretary for Labor and Welfare, Matthew Cheung, says. He also points out that the government has published ads in local newspapers and placed information stations at domestic worker hangouts around the city so that women who are facing any sort of abuse can come forward.

But the responsibility lies solely on the domestic worker to report infractions, Archana Kotecha, a human-rights lawyer with Liberty Asia, tells TIME. “Labor inspections are generally limited to factories, not really to homes,” Kotecha says. And despite the hotlines and promises of police action, Tang said that he still meets domestic workers who are too fearful to press for better conditions.

According to Tang, it could take months to bring a legal case against an employer — and a lot of money. Even with the help of NGOs and their embassies, workers often run out of time, money or even willpower before their visas expire. “Many of the women would think, Am I doing the right thing? This is costing me a lot more than helping,” says Cynthia Tellez of the aid group Mission for Migrant Workers.

Human-rights groups point to the employment agencies that bring these women over to Hong Kong as the root of the problem. In October, a domestic helper named Uswatsun was fired from her job two days into her contract after accidentally dropping a bowl of soup onto her employer, according to Hong Kong’s Mission for Migrant Workers. She was then accommodated in an apartment run by her employment agency, but was allegedly denied food because she couldn’t pay a $1,800 “resettling fee” demanded by the agency — illegally, since such fees cannot exceed 10% of a worker’s first monthly paycheck. “They leave their families, they travel thousands of miles, then they get swindled,” Tang says of the many helpers who find themselves in similar predicaments.

The Hong Kong government is now looking to remedy this issue by establishing a code of practice for agencies (although it won’t be legally binding), and it has stepped up audits and raids on agencies, Labor Secretary Cheung says. But advocates say sanctions are not harsh enough. While some employment agencies have been fined over misconduct and perhaps had licenses revoked, “No one will be put to jail. No one will have a personal criminal record,” says Tang. “So that means if this is the case it doesn’t really reflect the seriousness of such crimes.”

Tellez says it is still down to NGOs to fund living expenses and accommodation for abused helpers while their legal cases play out. And groups like the Mission for Migrant Workers confirm that they are continuing to help abused migrant workers bring their employers and employment agencies to justice — and that cases of abuse are still woefully common. They may not be as egregious as Erwiana’s, but without major legal overhauls, says Allan Bell, a lawyer participating in the Domestic Workers’ Roundtable, “There will be more Erwianas to come.” 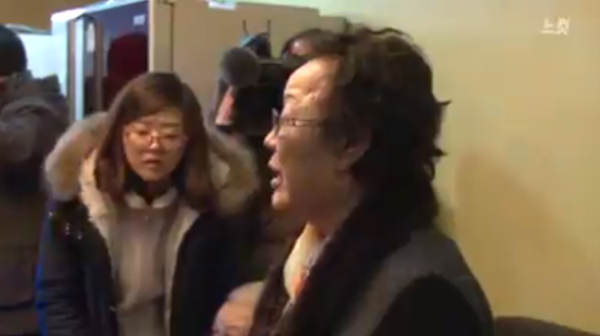 Watch a Korean 'Comfort' Woman Explode With Anger at a Foreign Minister
Next Up: Editor's Pick