Now Women Should Register for the Draft

Secretary of Defense Ashton Carter announced last week that all positions in the U.S. military would now be open to any member of the armed forces who can meet the standards. This means that women will now have the right to serve in every position in the U.S. military. But rights and responsibilities go hand in hand. Women must now also share the responsibility to be called upon to serve and defend their country in the event that a draft is required.

In the wake of Secretary Carter’s announcement, Congress should now require young women as well as men to register for the Selective Service System. Since women will be able to serve equally in every position throughout the military, there will no longer be any reason to exclude them from this requirement.

The nation established the Selective Service System in 1917 in order to provide conscripted manpower to rapidly expand the U.S. military to fight World War I. That system ended after the war, but was used again for World War II and the Korean War. It then remained in place through the Vietnam War. Conscription throughout the 20th century was always limited to drafting qualified young men into the ranks.

The draft’s deep unpopularity during the Vietnam era led to the end of conscription in 1973 and the beginnings of today’s all volunteer force. But in 1980, President Jimmy Carter reinstated the requirement for all men between ages 18 and 26 who reside in the U.S. to register with the Selective Service, to facilitate future conscription efforts should the draft need to be reinstated.

The all-volunteer military has been a virtually unqualified national success—so successful, in fact, that at least two members of Congress have called for abolishing the Selective Service System. But that would be an extremely dangerous move.

In a world rife with increasing threats from terrorists and aggressive powers, the U.S. must have the ability, even if rarely used, to rapidly expand its armed forces in time of national emergency. Numerous presidents and secretaries of defense have reaffirmed that the Selective Service System is a vital hedge against unforeseen circumstances and that it would help to ensure that any future draft be more fair and equitable than the Vietnam era model.

There is now a strong legal case to be made that the current system, which requires only men to register for the draft, is discriminatory and violates the equal protection clause of the U.S. Constitution. Past legal challenges have sustained the current rules, based upon the fact that women were not allowed to serve in combat positions. But that rationale no longer holds.

Two plaintiffs have already sued the Selective Service System for gender discrimination, and one of them will be heard Tuesday by the United States Court of Appeals for the Ninth Circuit. It is quite possible that the courts will rule that the current laws are unconstitutional, requiring Congress to change or abolish the current system.

But more important than the legal mandate is the moral one. Women in the U.S. have the right to be able to compete on equal terms with men for any position for which they are qualified. In the military, women have qualified as fighter pilots, paratroopers, warship captains and now Army Rangers. Requiring young women to share the burden of defending the nation is the ultimate equality, because it is a fundamental and non-negotiable responsibility of all citizens. Now that American women will have the right to serve in all military positions for which they qualify, they must also take on equal responsibility for serving and protecting the nation—including on the front lines—as their male colleagues.

Requiring women to register for the Selective Service System does not mean that in the event of a draft, women will somehow be forced to serve in equal numbers with men in the combat positions that were just opened. Rigorous entry standards for combat positions (as well as other billets) would remain in place even if a draft occurs. Men and women who meet those standards, or can be trained to do so, will be assigned to roles consistent with their abilities. Those men and women who are better suited for other roles will serve in different capacities, as has always been the case in draft militaries.

But those who do meet the standards, regardless of gender, should be assigned to the positions in the infantry, armor and other positions for which they qualify. This exposure to battlefield risk and frontline danger is the ultimate test of what it means to serve the country—and American women should bear that responsibility every bit as much as American men.

Last week’s announcement on opening all combat positions to women is about to start a much needed national dialogue about who should serve—and who is responsible for defending the nation. Secretary Carter’s decision ensures that the all-volunteer military will have access to the broadest range of talent, male and female, that the U.S. has to offer. But the nation will also need access to the best talent—male and female—if a national emergency requires the country to reinstate the draft.

If a seemingly modest policy change from the Pentagon can provoke this debate among the broader population of the U.S., so much the better. We live in an increasingly dangerous world, and all Americans need to be reminded of their responsibilities to defend our nation. Requiring both men and women to register with the Selective Service reinforces a powerful and needed message of national commitment to friends and foes alike. 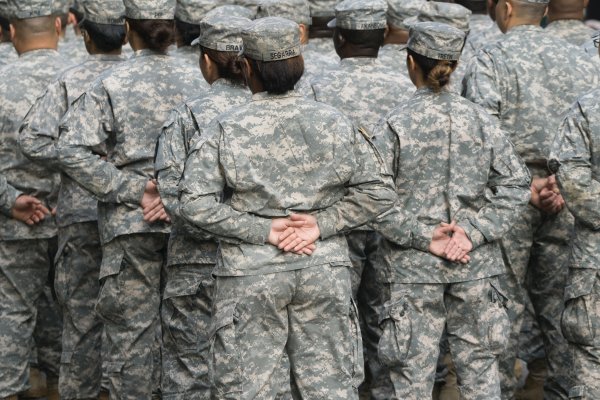 Secretary of Navy: Allowing Women in Every Combat Role Was Overdue
Next Up: Editor's Pick