Democratic presidential candidate Bernie Sanders has won the online readers’ poll for TIME Person of the Year, topping some of the world’s best-known politicians, activists and cultural figures as the most influential person of 2015 among those who voted.

The Vermont Senator won with a little more than 10% of the vote when the poll closed Sunday at midnight. That’s well ahead of Pakistani girls’ education activist Malala Yousafzai, who was in second place at 5.2%, and Pope Francis, TIME’s 2013 Person of the Year, who finished third with 3.7%.

Sanders also placed far ahead President Obama (3.5%) and ahead other 2016 candidates, including Republican Donald Trump (1.8%) and Democratic rival Hillary Clinton (1.4%).

See the full results of the poll here

Sanders has helped define the presidential race, calling for big-ticket progressive items from single-payer healthcare to tuition-free public universities. He has mobilized the Democratic Party’s liberal base and inspired massive campaign rallies across the country.

But he remains a distant second for the Democratic nomination in 2016, lagging more than 20% behind Clinton in national polls and overwhelmingly behind in support among Democratic members of Congress and party leaders.

MORE The Gospel of Bernie

Sanders has said his goal is a political revolution that will reenergize the electorate and push big money out of politics. “A lot of people have given up on the political process, and I want to get them involved in it,” Sanders told TIME in a September cover story. “In this fight we are going to take on the greed of the billionaire class. And they are very, very powerful, and they’re going to fight back furiously. The only way to succeed is when millions of people stand up and decide to engage.”

TIME’s editors will choose the Person of the Year, the person TIME believes most influenced the news this year, for better or worse. The choice will be revealed Wednesday morning during NBC’s Today show. 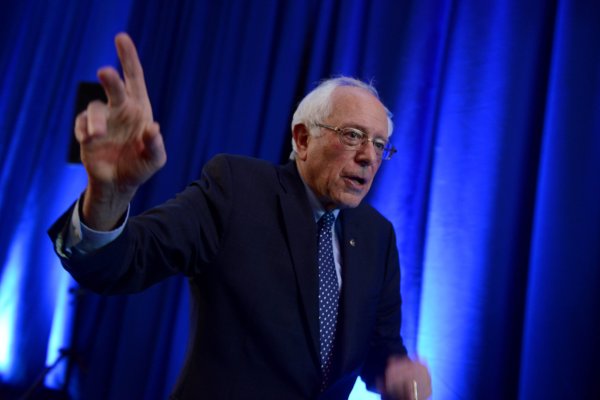 Bernie Sanders Keeps Strong Lead in TIME Person of the Year Poll
Next Up: Editor's Pick