Ask Cate Blanchett and Rooney Mara what it was like to work together so intimately on their new film, and they exchange a meaningful glance. “It was awful,” Blanchett jokes. “I measured our trailers—hers was five and a half inches longer—and that was it. The curtain went up.”

“We had to be separated,” Mara chimes in.

This seems unlikely, given how their chemistry radiates from the screen in Todd Haynes’ film Carol, now in theaters. It’s a long-overdue adaptation of Patricia Highsmith’s 1952 novel The Price of Salt, which tells the story of a tryst between charismatic housewife Carol Aird (Blanchett) and meek shop girl Therese Belivet (Mara). After meeting by chance, the women forge a friendship that turns intimate, threatening Carol’s relationship with her husband (Kyle Chandler) and custody over her daughter. At turns erotic and wrenching, their tender performances have earned rave reviews and—for Mara—the Best Actress prize at the Cannes Film Festival earlier this year. But the journey to bringing the film to the screen was a lengthy one.

“Normally by the time something like this gets made—as delicate and fragile and special as it is—it goes through a whole layer of compromise,” Blanchett says. There was ample time for such compromise to occur: Carol‘s release came nearly two decades after screenwriter Phyllis Nagy, a playwright who was friends with Highsmith in the later years of the author’s life, began working on the script. Over the years, Nagy tweaked various drafts as new directors became attached and then unattached. And once Haynes came on board in 2013, there was still the matter of financing. Funding Carol was an obstacle related less to the film’s story of same-sex love than to the fact that it stars two women—at a time when leading women are still assumed a box-office risk until proven otherwise.

But Blanchett says that compromise never took place. “Sometimes you get to the end of the movie and think, ‘Oh, if only,’” she says. “I don’t have any ‘if only’ about it.” Though the performances have been universally lauded, both actresses credit Haynes with creating an atmosphere on set that allowed them to take emotional risks. “Todd’s work is so dangerous and surprising, but never in a pretentious way,” Blanchett says.

“He makes you feel like you can go anywhere and it’s safe,” Mara adds.

With Carol, Haynes endeavored to tell a story whose emotional core lay in the messiness of love itself rather than in its lovers’ genders. “Aspects of guilt or handwringing that one might expect in a film set in the ‘50s about women who discover their love for other women—a lot of these things are not in Carol,” he explains. Nagy, in writing the screenplay, and Haynes, in directing, took their cues from the novel, which Haynes says “has an unapologetic lack of psychological rummaging or causal explanations.” The book and the film also avoid tacking on “one of those corrective endings, which present sort of moral assessment of this behavior.”

Since its release at Cannes in May, Haynes has found that the conversation surrounding a movie about same-sex love—in a year of both major political gains and continued challenges to gay rights—often ascribes a social agenda even where it is not present. “It speaks to almost a wish for an agenda on the part of the filmmaker that makes everybody feel that a certain box has been checked and there’s a certain social moment that’s being acknowledged,” he says.

For Haynes, it was the story’s rendering of love—a universal experience rooted in the specificity of Therese and Carol’s worlds colliding—that drew him in. “I really was so much more thrilled by how the specific experience of falling in love was made so familiar and resonated for me, reminded me of my own self at a younger age,” he says.

And it was that tender depiction of love, rather than any political statement, that attracted Mara and Blanchett, as well. “Really, at its core, it’s a love story,” Mara says. “We have to have the conversation that it’s a love story about two women, because we haven’t moved past that yet as a society.” Blanchett adds, “There’s a conversation that you could scaffold around it to that end, but the actual content of the film and the experience of watching the film is more universally human than that.”

Still, Blanchett says, the line between a story about love and a story about the quest for identity is a fine one. “When people fall in love, their identity is called into question,” she says. “You have to look at your life and what you value and what you’re prepared to risk. Your whole self is called into question and then, whether you leap or don’t leap. Whether you answer the siren’s call and risk smashing into the rocks or not.”

Haynes says that although some might attribute that crisis of identity, especially for Therese, to the newness of falling for a woman, the feeling is much the same regardless of who the object of one’s affection may be. “These women really didn’t have a language for their feelings, and in particular Therese, an example in the world to follow. What’s funny is that’s how people feel when they fall in love—like they’re in uncharted territory and no one’s ever been there before,” he says.

Though it’s early yet, Carol has already received a slew of awards from the New York Film Critics Circle, whose 30 members voted it Best Picture in addition to Best Director, Best Screenplay and Best Cinematographer. Carol also led the nominations at the Golden Globes, with nods for Blanchett, Mara, Haynes, the movie and its score.

For a film that might never have seen the light of day, it’s a welcome validation that its merits run far deeper than the relative novelty, on the silver screen, of its lovers’ common gender.

The very fact of Carol’s apolitical nature, meanwhile, would appear to be a political statement in itself. The burden of representing an underrepresented group in art seems to be gradually lifting from the shoulders of directors like Haynes.

Blanchett sums it up: “The more stories there are about diverse types of relationships,” she says, “the less a film like this has to stand for everybody.” 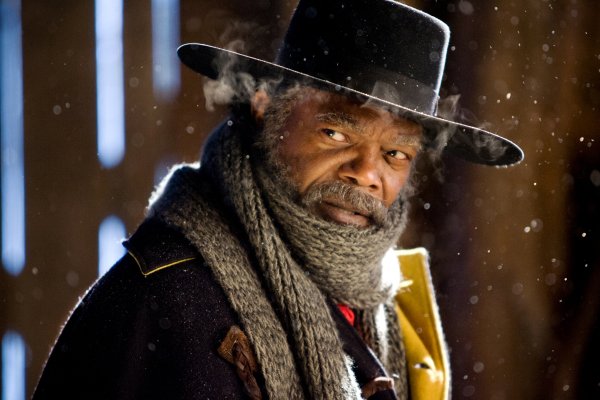 Quentin Tarantino's Hateful Eight Revels in Snow, Not So Much in People
Next Up: Editor's Pick