Chennai continues to face its worst rains in over a century, with the death toll from flooding in the southern Indian city increasing even as Friday brought a semblance of respite.

A total of 269 people have died since torrential rains first began lashing the coastal city about a month ago, India’s Home Minister Rajnath Singh was quoted as saying by the Indian Express newspaper.

Singh also added that close 60 others have lost their lives in other parts of the country’s south, in what he called an “unprecedented calamity.”

Around a million people have also been displaced from their homes, the Los Angeles Times cited a local journalist as saying.

“The rain has been abnormal. People have not seen this rain in their lifetime,” Jomey Joseph, head of the Chennai office of Catholic Relief Services, told TIME on Friday afternoon from Pondicherry about 100 miles south of the city. Joseph and her organization, along with several others, have been providing cooked food, dry rations and protective materials such as tarpaulins to people in the nearby districts of Cuddalore and Villapuram — where she estimates about 20,000 people have lost their homes.

“We have not yet gone to Chennai because Chennai is completely flooded and we have not been able to enter most of the areas,” she said. “It’s been raining very heavily so distribution [of relief materials] has also been a big challenge.”

Indian Prime Minister Narendra Modi, who flew to Chennai to survey the devastation on Thursday, announced an aid package of $150 million from the central government in addition to the $140 million that has already been set aside for rescue and relief.

Large swaths of the city — one of India’s largest — have come to a complete standstill, with nearly half the electrical supply being cut off and telephone and transport services severely impacted. The international airport has also been closed until Sunday because the runway and tarmac were submerged under 7 ft. of water, according to reports.

Although the downpour ceased by Friday morning, Chennai is still reeling from having received more rain in a 24-hour period than it normally does during the entire month of December.

“Shelter and livelihood is also going to be a big issue now,” Joseph said.

Read Next: Facebook Has Activated Safety Check in India for the Chennai Floods 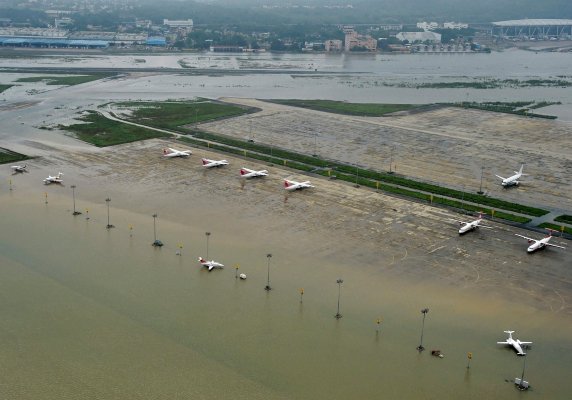 See How the Worst Rainfall in a Century Shut Down This Indian Airport
Next Up: Editor's Pick