Women in Combat: Why the Pentagon Chief Overruled the Marines

Defense Secretary Ashton Carter ruled Thursday that women will be allowed to serve in all combat jobs in the U.S. military.

“As long as they qualify and meet the standards, women will now be able to contribute to our mission in ways they could not before,” he said. “Even more importantly, our military will be better able to harness the skills and perspectives that talented women have to offer.”

The Marines, alone among the services, had argued that women should be barred from the corps’ ranks of infantry, machine-gunners and fire-support reconnaissance units.

Carter’s bottom line echoes what advocates of opening up front-line combat jobs to women have long argued: that while the average female soldier or Marine may be weaker and slower than her male counterpart, outstanding women can out-perform average male military personnel. The defense secretary, who never served in uniform, relied on the advice of former Navy officer and current Navy Secretary Ray Mabus—who is the Marines’ civilian overseer—for cover in steamrolling the Marines’ recommendation against women serving in such combat assignments.

That could cause trouble on Capitol Hill. Rep. Duncan Hunter, a California Republican who served as a Marine in both Afghanistan and Iraq, called for Mabus’ resignation after word leaked out that he was over-ruling the corps’ brass. “He insulted the competency of Marines by disregarding their professional judgment, their combat experience and their quality of leadership,” Hunter, a member of the armed services committee, said in a September letter to Carter. The Republican chairmen of the armed services committees said in a statement following Carter’s announcement that they looked forward to reviewing “the 1,000-page Marine Integrated Task Force report” that buttressed the corps’ request to keep women off the Marines’ front lines.

Other lawmakers hailed Carter’s action. “We know from all the quality data that women are just as capable and lethal on the battlefield, and so many women are already serving their country with pride and distinction,” said Rep Jackie Speier, D-Calif., also a member of the armed services panel. “It is long past time that we let them fight in every capacity.”

The Marines’ recommendation had come from General Joseph Dunford, who was serving as commandant—the Marines’ top officer—when the corps relayed its recommendation to Carter. But since Oct. 1, Dunford has served as chairman of the Joint Chiefs of Staff, the principal military adviser to the President. Nonetheless, Carter noted that Dunford “recommended that if we were to integrate women into combat positions, then implementation should be done in a combined manner by all the services working together.”

The Marines argued that male Marines were better shots:

And the corps said its studies showed that females were more likely to be injured in training than males:

But Carter wasn’t swayed. The corps’ arguments were “just not definitive, not determinative,” Carter said. In his three-page order opening all combat slots to women, for example, he acknowledged the differences in injury rates. “Both the Army and Marine Corps studies found that women participating in ground combat training sustained injuries at higher rates than men, particularly in occupational fields requiring load-bearing,” he wrote. “These studies also revealed concrete ways to help mitigate this injury rate and the impact to individuals and the teams in which they operate.”

Careful implementation should smooth the path of women into all combat units, including the Marines, Carter said. “I believe that the issues raised, including by the Marine Corps, could be addressed successfully in implementation,” he added, echoing a theme he cited several times at the press conference where he made his decision public.

Dunford, the nation’s highest military officer, was conspicuously MIA as Carter made history. Reporters wondered why. “General Dunford and I have discussed this many, many times,” Carter responded. “And he will be a full part of implementation.” 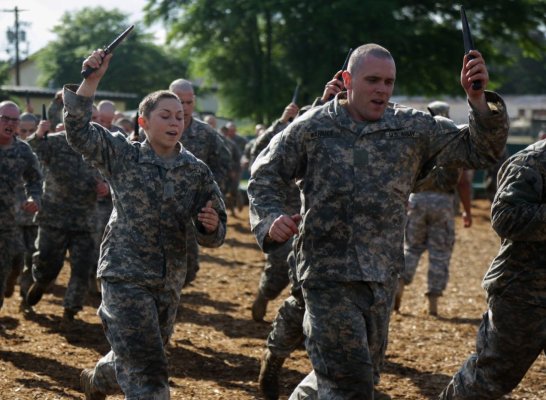 Pentagon Opens All Frontline Combat Jobs to Women
Next Up: Editor's Pick