Why Venezuelans Are Carrying Backpacks of Cash on the Streets

A man displays bolivar notes that he carries to pay for goods at a street market in Caracas on Oct. 1, 2015.
Marco Bello—Reuters
By Ioan Grillo/Caracas

When Cesar Rodriguez travels across Venezuela on business for an aluminum company, he likes to carry the equivalent of $200 in cash as well as his debit card. But since Venezuela now has an inflation rate of more than 150 percent—the worst in the world—that means taking more than 180,000 bolivars, the local currency, which fills up half of a backpack. And with the greater fear of getting mugged, he also stashes bills in his socks and various pants and shirt pockets, in case his bag is taken. “Just making simple transactions has become a real challenge,” says Rodriguez, 42. “I have bills counted out in bundles of 2,000 or 10,000 bolivars, so I can pull them out quickly without showing all my money.”

This hyperinflation has become one of the most visible symbols of the crumbling economy of this South American nation, ruled since 1999 by the socialist alliance of the late Hugo Chavez. The currency crisis has vaporized people’s salaries and contributed to chronic shortages of everything from chicken to toilet paper. The political opposition, which has come together in the Democratic Unity coalition, has put the economy at the heart of its campaign for Congressional elections held on Dec. 6. Recent polls show it ahead by 15 points or more, putting it on a path to break the rule of the socialists, or Chavistas, in the National Assembly after 16 years.

The government under Chavez’s successor President Nicolas Maduro has tried to stabilize the currency by enforcing a fixed exchange rate of 6.3 bolivars to the dollar. But they have no way of controlling the black market, where the price for a dollar has spiraled. This year alone it has gone from 170 bolivars in January 2015 to more than 900 this month, a rise of 530 percent. Government efforts to introduce intermediate exchange rates and jail black marketers have failed to stem the free fall.

Beyond eating away at the popularity of the government, the hyperinflation has made basic aspects of life in Venezuela difficult. Limits on some ATM machines mean that people can only take out the daily equivalent of $4. Businesses large and small have brought in counting machines to deal with the thick wads of cash needed for everyday purchases. Changing $1,000 can buy enough bolivars to fill a suitcase.

Despite regular raises, salaries given out in bolivars have plummeted in their actual worth. Cristina Ramos, 43, who works for the state-owned oil company, has watched her wages tumble from the equivalent of $600 a month in 2012 to about $70 this month. “I thought we could never become this poor because we were in Venezuela, which is an oil rich country,” Ramos said. “But now we are living like people in Cuba.”

The lack of dollars in the economy makes it difficult to import goods. Supermarkets ration supplies with checks by fingerprint scans. Shortages vary—milk one week, butter the next, paper napkins the week after that. When goods are available, the lines circle around city blocks.

So what happened to the economy of Venezuela, a country that has bigger oil reserves than wealthy Saudi Arabia. The charismatic Chavez gained massive popularity by lambasting the inequality that has long haunted Venezuela and building what he called “21st century socialism.” Funded by sky-high oil prices through much of the 2000s, he raised housing projects and medical clinics in the slums, initially reducing poverty. Under his rule, the economy grew and while inflation was high, it was not off the chart. He also expropriated large chunks of the private economy, from steel works to dairy farms.

However, Chavez’s death in 2013 coincided with a severe drop in oil prices, robbing Venezuela of the best way to replenish its dollar reserves. Meanwhile, the unproductive state-owned companies and farms have failed to produce enough for Venezuela’s 30 million people. President Maduro also blames shortages on what he calls an “economic war” of black market profiteers and opposition forces trying to destabilize the country. “Saboteurs. Parasites. That is enough,” Maduro said in a TV address on Tuesday. “They have the products. But they close the doors so the people wait suffering in the sun.”

However, the opposition argue Maduro is passing the blame. “This economic war is a fantasy,” Miguel Veliz, an economist and congressional candidate told TIME. “The government is in control of the economy so it is the one to blame. Its chronic mismanagement has given way to the inflation and shortages. It has devastated the abilities of companies in Venezuela to produce.” And while Maduro is the one holding the bag, even the opposition says that Chavez left a disaster waiting to happen as soon as oil prices fell.

If the opposition wins a majority in the National Assembly on Dec. 6 it will push for immediate measures to try and rescue the currency, Veliz said, but warned that it could still take time. The opposition have also said they will look at a recall vote to remove Maduro from the presidency, long before his term is due to finish in 2019.

The government has promised to respect the results of the legislative election. However, Maduro has also made confrontational statements in election events this week, raising fears of a clash if things don’t go his way. “I know we are going to triumph but if there are negative circumstances, I will go to the streets and fight with the people,” Maduro said Tuesday “The revolution will go to a new stage.” If that happens, hyperinflation may be the least of Venezuelans’ worries. 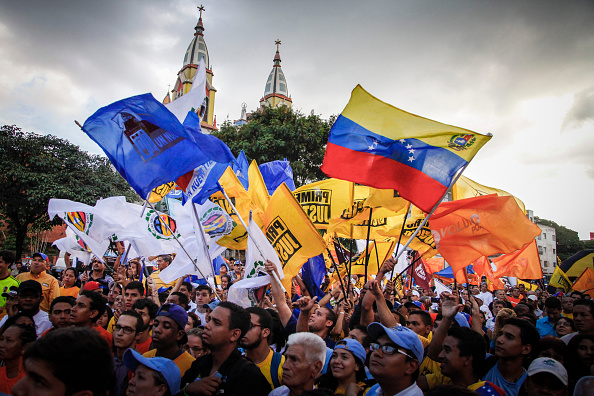 Three Arrests Over Venezuelan Candidate Killing
Next Up: Editor's Pick